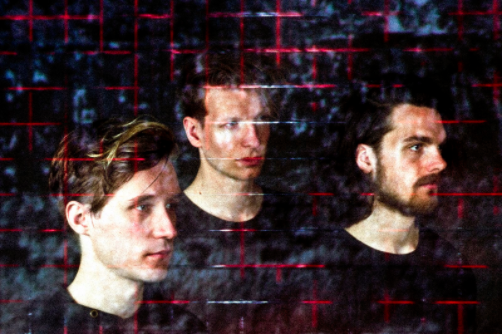 “Dutch widescreen rockers Stillwave conjure an intimate intensity that’s all their own.” – Q Magazine
“…an enthralling document with a cinematic stretch” – Clash

Dutch shoegaze trio Stillwave share their brand new single ‘Cradle’. With its driving electronic drumbeat and fragmented lyrics, the track was an unexpected creation for the band. Listening to Kanye West’s ‘Yeezus’ at the time, they were influenced by his change in structure from previous work and ‘Cradle’ showcases a new direction of their sound.

Marcel Jongejan (lead vocals) on the inspiration behind Cradle: “For us, it encompasses our journey until that point and the excitement and trepidation for the recording process that awaited us. It’s the song where we look back at all that we did that made us into the band we are, with the knowledge that we can never recreate our past selves.”

After graduating from college with two Economics degrees and one Law degree between them, the trio of Marcel, Michael and Jooris committed themselves to Stillwave, working minimum wage part-time jobs to get by. Focused on playing live every week they knew they had to set themselves apart from other Dutch bands. Taking the ferry to the UK, and barely making it to Calais at 4 AM just to play a gig somewhere in an old industrial city up North, this became a regular journey for the band. Finding salvation in those dingy independent venues that reeked of hope and beer, they would marvel at the list of heroes who had stood on the very stages before them, be it Radiohead, David Bowie or Slowdive. This was their driving force and it took them to places; from sharing the stage with65daysofstatic to hosting the afterparty for The Cure when they visited the Netherlands, their vision as a band was slowly becoming clearer

When an original member, Adriaan, decided to leave the band, it was a critical turning point for Stillwave. Using the unexpected news to push themselves to form a bond which went further than the music, it only seemed right to ask their longtime roadie and childhood friend, Joris, to join the band.

Stillwave have caught the attention of numerous blogs and radio stations worldwide (Q magazine, Wonderland, 1883 Magazine, Nothing But Hope and Passion, Drunken Werewolf, Little Indie Blogs and many more). With the two EPs under their belt, Stillwave have played over 100 shows with multiple tours in the UK and The Netherlands and are set to release their debut album in late 2017.