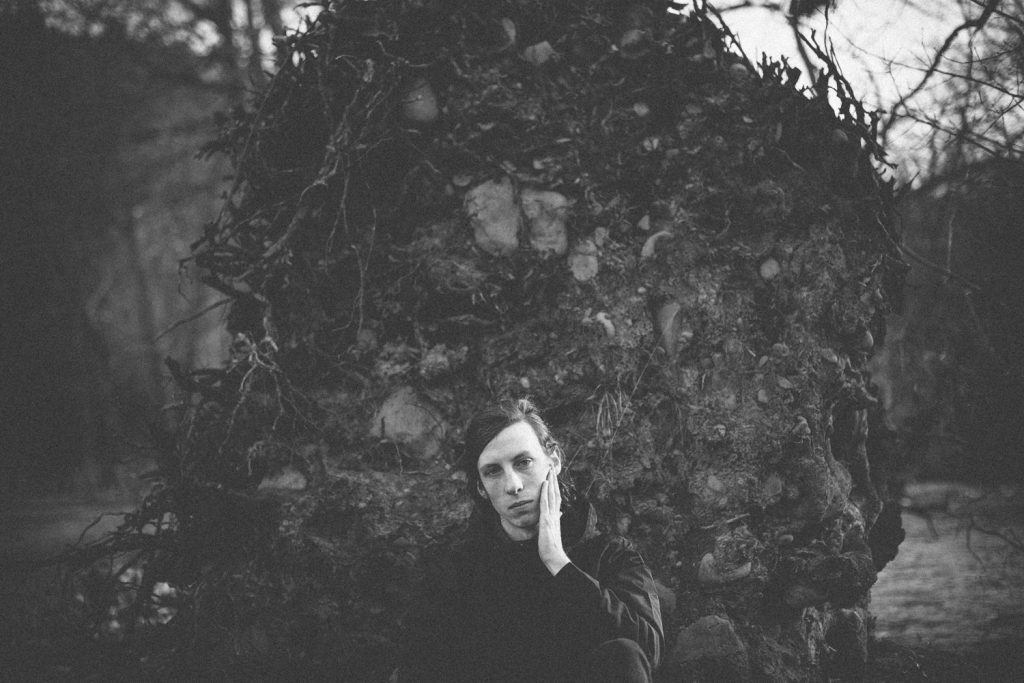 Wicca Phase Springs Eternal, the enigmatic, project of former Tigers Jaw member and GothBoiClique co-founder, Adam McIlwee, has announced an adventurous new EP, Raw and Declawed. The EP is due out July 14th via Disposition Collective, and to mark the announcement BrooklynVegan has premiered the release’s first track “Icebreaker”, calling the song “dark, moody, and introverted, with Adam’s mopey baritone sounding as gripping as ever.”

Raw and Declawed marks a stark departure from much of McIlwee’s work as Wicca Phase Springs Eternal. While you’d be hard-pressed to determine what Wicca Phase‘s signature sound is on any given day, up to this point the project has mostly been defined by its unlikely blend of trap beats and cadences with the earnest melancholy of punk and emo. This genre-defying combination has begun to catch steam, in no small part due to Wicca Phase and the work of GothBoiClique: the musical collective co-founded by McIlwee that includes like-minded artists like the polarizing Lil Peep. Despite the spotlight on this burgeoning music scene, McIlwee’s newest release takes a very different approach.

No matter what sonic rabbit hole is being explored, what truly defines Wicca Phase is McIlwee’s distinct vocals and lyricism. His love of cleverly morose storytellers, like Nick Cave and Morrissey, has always been been a subtle part of Wicca Phase, but on Raw and Declawed those influences are brought to the forefront as the usual electronics and effects are stripped away, leaving only McIlwee’s acoustic guitar and unique, almost-crooning vocals. The results are starkly beautiful songs that harken back to McIlwee’s past work in Tigers Jaw, but also point to the project’s future: one unrestrained by genre, where Wicca Phase Springs Eternal can be anything and everything.

Raw and Declawed tracklist:
1. Icebreaker
2. Don’t Get Me Started
3. Life After Death (Stressed Beyond Stressed)

Biography:
In 2013 Adam McIlwee walked away from Tigers Jaw, the band he’d founded and spearheaded, just before the release of Charmer, the critically acclaimed album he’d helped create. Leaving a beloved band with an upward trajectory may seem like a bad career move, but for McIlwee it was the start of an adventurous new chapter: Wicca Phase Springs Eternal. Everything about Wicca Phase Springs Eternal is enigmatic: from the cryptic moniker, to the laundry list of collaborators and connections, to the diverse range of sounds and styles found throughout an extensive discography. Trying to unlock Wicca Phase can at first seem intimidating, but boil the project down to its essence, however, and you’re left with a few key constants: McIlwee, his gift for words and melody, and the unpredictable.

While Mcllwee had already been releasing a small amount of music under the Wicca Phase Springs Eternal moniker prior to his departure from Tigers Jaw, it wasn’t until the project became his main focus that listeners began to truly take notice. Through a prolific stream of releases and collaborations McIlwee began honing Wicca Phase’s unique mix of trap, dark electronics, and emo, a blend that initially caught many listeners off guard. Drawing on starkly disparate influences like the bombastic beats of trap music, the darkly witty storytelling of Nick Cave, and the heart-on-sleeve earnestness of emo, McIlwee began to train his listeners to expect the unexpected.  Utilizing anything and everything from lush guitars, to recognizable samples, to thumping kick beats, Wicca Phase’s style defies a single genre tag, and is never easy to pin down but always compelling. No matter what amalgam of contrasting sounds and styles Wicca Phase is using, the constants that bring everything together are McIlwee’s distinctive voice and lyrics. His deep, almost crooning voice propels a flow that is at once assured and vulnerable, delivering darkly emotional snapshots of longing that feel highly specific to McIlwee’s experiences, but offer enough wit and ubiquity for listeners to easily latch onto.

The try-anything approach began to pay off as momentum for Wicca Phase grew, and McIlwee soon found a like-minded audience and potential collaborators. This led to the creation of GothBoiClique, a ten person collective founded by McIlwee and his musical kindred spirit, Cold Hart, intended to bring some of the best artists pioneering this new style under one banner. This collaborative spirit, as well as each members’ individual successes (like that of Lil Peep, the group’s most recent addition), has led to GBC’s raised profile as leaders in a burgeoning new musical style and the fervent community surrounding it.

Now, just as Wicca Phase Springs Eternal has begun to establish some semblance of a recognizable MO, McIlwee has once again thrown a curveball, this time in the form of a three song EP, titled Raw and Declawed, from Scranton, PA’s Disposition Collective. The tracks on Raw and Declawed are once again built around McIlwee’s distinguishing vocals and melodies, but musically bear more resemblance to his work in Tigers Jaw than anything in Wicca Phase’s dense discography. Opening track “Icebreaker” was written years ago during McIlwee’s tenure with his old band but has been given a brooding makeover with acoustic strumming bathed in dissonance. The EP’s songs follow this stripped down template, with feedback and atonal textures bleeding in and out of McIlwee’s lilting cadences. Raw and Declawed marks yet another sonic pivot for Wicca Phase Springs Eternal, but that’s exactly how Mcllwee want’s it. This step in his musical evolution finds him bringing the sounds of his past into his present and opening up the possibilities for what Wicca Phase can be in the future. For Wicca Phase Springs Eternal there are no rules or boundaries, only whatever drives McIlwee’s unique creativity, no matter how unpredictable.