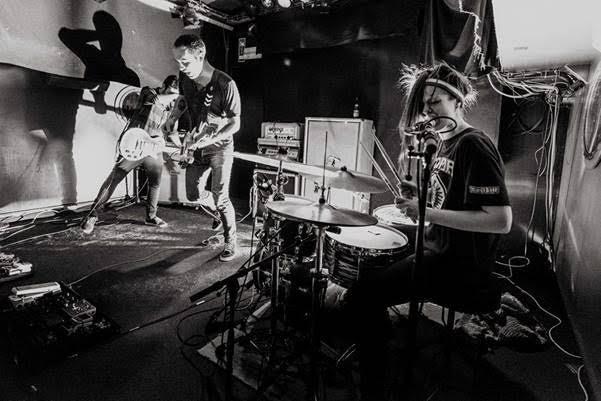 Belgian trio BRUTUS streaming entire debut album ahead of Sargent House worldwide release
“A powerful and thrilling blend of punk, rock, indie and hardcore that’ll get the teeth in your skull rattling.” – NME
“Brutus contribute an intriguing new voice to underground music.” — Rock Sound
“They’re in a field of their own… this is one of the albums of the year” (5/5 Ks) — KERRANG!
Belgian trio Brutus are streaming the forthcoming worldwide release of their debut albumBurst starting today via Clrvynt. Hear and share the full album HERE.
Sargent House recently signed Brutus to its label and management roster and will soon release the band’s debut in North America and the rest of the world in partnership with Hassle Records, the band’s European label. “My reaction was immediate, the second I heard the first track I was hooked and knew I wanted to be part of this band’s team,” says Cathy Pellow, who also manages such artists as Chelsea Wolfe, Deafheaven, Russian Circles to name just a few.

Metal Injection recently premiered the first single from the album, “All Along” HERE. Brooklyn Vegan

launched the track “Drive” HERE.
Hailing from Leuven, Belgium, Brutus create a pummeling, meteor-shower of sound. Vocalist/drummer Stefanie Mannaerts mixes black-metal blast beats with math-rock flourishes whilst belting out the most impassioned vocals that shift from deceptively melodic to outright larynx-punishing in the blink of an eye. Meanwhile, guitarist Stijn Vanhoegaerden takes ethereal post-rock tones to hardcore punk levels of speed and energy alongside Peter Mulders’ powerful sub-frequency shift. The three conspire to make a sound as monolithic and frantic as it is emotive.
Having gigged rigorously across Belgium, in April 2016 Brutus decamped to Vancouver, BC to record Burst. “We sent an email to Jesse Gander (Japandroids, White Lung), his reply with sushi emoji’s was an instant ticket,” Stefanie explains. “The time in Canada, living together and working in the studio was refreshing, inspiring, healing and confronting at the same time.” Burst is the perfect title for this debut album, then. “It’s the perfect title for me,” Stefanie adds. “It’s a ball of emotions, ready to burst with frustration and anger. But also with tons of energy, love… everything at once.” Trouble comes in threes… and so does Brutus.
Burst will be available digitally worldwide on May 12th, 2017 and physically on June 30th, 2017 via Sargent House. Pre-orders for LP/CD via HelloMerch and download via iTunes.
BRUTUS LIVE:
05/19 Middelkerke, BE @ De Zwerver
05/26 The Hague, NL @ Sniester Festival
06/10 Retie, BE @ Retie Rockt
07/07 Gloucester, UK @ 2000 Trees
07/14 Herk-De-Stad, BE @ Rock Herk
07/15 Dour, BE @ Dour Festival
07/29 Michelau, DE @ Rock Im Wald
08/13 Budapest, HU @ Sziget Festival
08/19 Bristol, UK @ ArcTanGent Festival
09/02 Heusden, NL @ Misty Fields