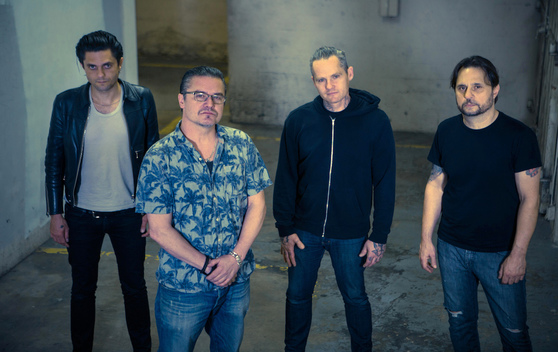 Dead Cross, the SoCal hardcore band featuring Dave Lombardo (ex-Slayer/Suicidal Tendencies), Justin Pearson (Retox/The Locust), Mike Patton (Faith No More/Tomahawk) and Michael Crain (Retox, Festival of Dead Deer), premiere a new video for “Obedience School” directed by Dennis Bersales, whose work has been used in collaboration with Dim Mak, Three One G, SM Prime, Kenneth Cobonpue, and Roberto Cavelli. The track features on their new self-titled album, produced by the legendary Ross Robinson, to be released August 4th on colored vinyl and CD via Ipecac Records and Three One G, as well as digitally through iTunes.

Dead Cross’ debut self-titled LP vacillates from sounding like Godzilla attacking Tokyo to becoming the potential soundtrack of witches catching waves in a hurricane. Its highs are sharp and wicked, its lows ominous and evil, all the while laced with wit and, many times, an element of tongue-in-cheekiness not often found in thrash or hardcore music. Dennis Bersales brings the unyielding intensity of the band to life in the video for Obedience School, made from actual footage of a cockfighting event in the Philippines. Though brutal, the violence is anything but gratuitous; the imagery meaningfully works in conjunction with Patton’s lyrics, forcing the viewer to consider the ugly tendencies of mankind.

* – Secret Chiefs 3 do not perform