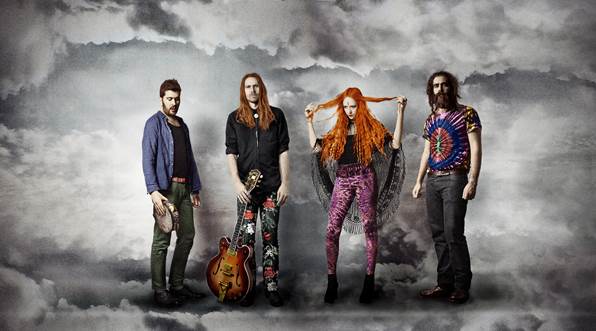 “Propellant grooves are the motor for a nocturnal yet luminous flight into the ether and beyond, it’s both intimate and out-there, and it’s going to lodge itself deep into your psyche.” – Team Rock

‘Lost In Love & Fear’ was recorded at Rockfield Studios, Wales, the legendary studio which opened in the mid-sixties that hosted the likes of Queen, Motörhead, Black Sabbath, Iggy Pop, Stone Roses & New Order. Specifically, the album was recorded in the Coach House, which Sound On Sound described as a “spacious 150-square-metre live area that still oozes 1960s charm, and features several isolation booths, which makes it a good choice for tracking with maximum separation between the instruments”. The band recorded with the legendary Nick Brine who’s been at the studio since the nineties and worked with everyone from Oasis to Bruce Springsteen.

Recording at this level of professionalism and taking the time to develop the dynamics within their sound has allowed Dark Moon to convey something entirely different with their debut. With a multitude of effects and instruments, the group are interested in creating a sensory audio journey full of texture and atmosphere. They utilise the sound healing element of gongs that provide a big part of their pallet, focussing on the idea that all people are linked by vibrations, and therefore to everything else. This therapeutic way of writing music has allowed ‘Lost in Love & Fear’ to take on something of a life of its own, a wildly unique experience, where every listen reveals something new.

The band explain that “The Gong creates the space for the listener to elevate their state and is very much integral to our sound. We also worked with the voice in this way, creating layers of chants and overtones floating in and out of the soundscape. The focus was always on creating an experience, with the songs drifting into one other allowing you to get lost in the journey.”

Another way in which Dark Moon aimed to create the perfect sound was, of course, in the how it was recorded. In true vintage style, every track was performed live and recorded directly to 2” tape. The band continue, “recording to tape was the only choice for us and playing live was the only way we felt we could capture it. The spirit of the moment is essential to our sound and our intention was to strive to document this sense on the physical plane”.

‘Lost in Love & Fear’ is out on November 25th and will be made available exclusively at their launch party at London Fields Brewery prior to release on the 17th. You can pre-order the album here: https://itunes.apple.com/gb/album/lost-in-love-fear/id1160247469