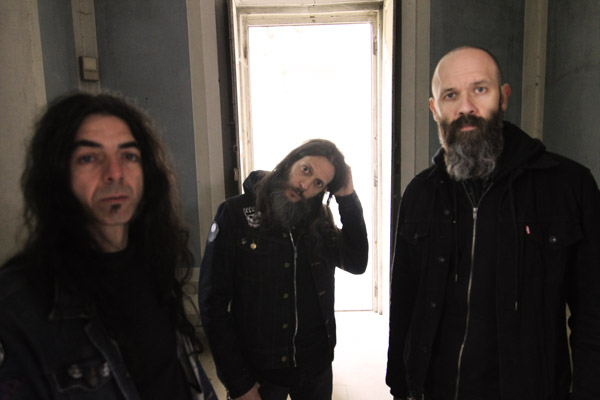 Ufomammut share the opening track (via Kerrang!) from their upcoming eighth studio album, 8, ahead of its September release via Neurot Recordings. About the track the band remark, “The track is based on Babel as Babylon, a biblical myth that explains why we all speak different languages. After the great flood a united humanity speaking a single language reunite in Babylon and they built a tower to reach heaven. God, as usual, scattered all the people around the world giving them different languages…The tower of Babel represents the perfection that goes against God. And that’s why the title of our new album resounds in 100 different ways.”

Explore the track and the cover art (realised by Malleus Rock Art Lab, the poster art collective including members of Ufomammut) below….

*To celebrate the release of their new album 8, the trio is going full throttle with a big release party at the Santeria Social Club (Milan, Italy). Ufomammut and Santeria have concocted a very unique night, which will also be the one chance to catch them for a full set in Milan in 2017. The release party will consist of three different parts:
At 6.00 PM Malleus Art Collective will unveil A Malleusdelic Trip Into Ufomammut. The exhibition will display, for the first time, the bulk of Malleus production for Ufomammut, a psychedelic trip from past to present fully dedicated to the band, which obviously bears great significance to the collective – as Poia and Urlo are in fact 2/3 of the band and Malleus.
At 9.30 PM Ufomammut will take to the stage for the first gig of the night: a very special “Mystery Set” which will unearth alien handcrafts from the very past of the band. A special surprise will only be announced hours before the event.
At 11.00 PM, after a break, Ufomammut will kick off the first integral performance of “8”: the new album will be played start to finish for the first time, and presented to the world in the most fitting way.
8 will be available to buy throughout the event in a very special and extremely limited edition. Malleus will also be working on a dedicated poster for the release party which will be something more than your usual gig poster. The event starts at 6.00 PM, admission is on a ‘pay as you wish’ basis, more details can be found on Facebook.
+ + +
8 is due for release on September 22nd on vinyl and CD formats via Neurot Recordings and on a limited and regular edition vinyl via Supernatural Cat; the limited edition 7” for the “Warsheep” single is out now. EU vinyl Pre-orders for the limited (500 copies) LP can be placed via Supernatural Cat, hand-crafted in Italy by Malleus. US Preorders can be placed via Neurot Recordings
http://www.ufomammut.com
http://www.facebook.com/ufomammutband
http://twitter.com/ufomammutmafia
https://ufomammut.bandcamp.com
http://www.instagram.com/ufomammut
http://www.neurotrecordings.com
http://www.facebook.com/neurotrecordings
https://twitter.com/OfficialNeurot
https://neurotrecordings.bandcamp.com