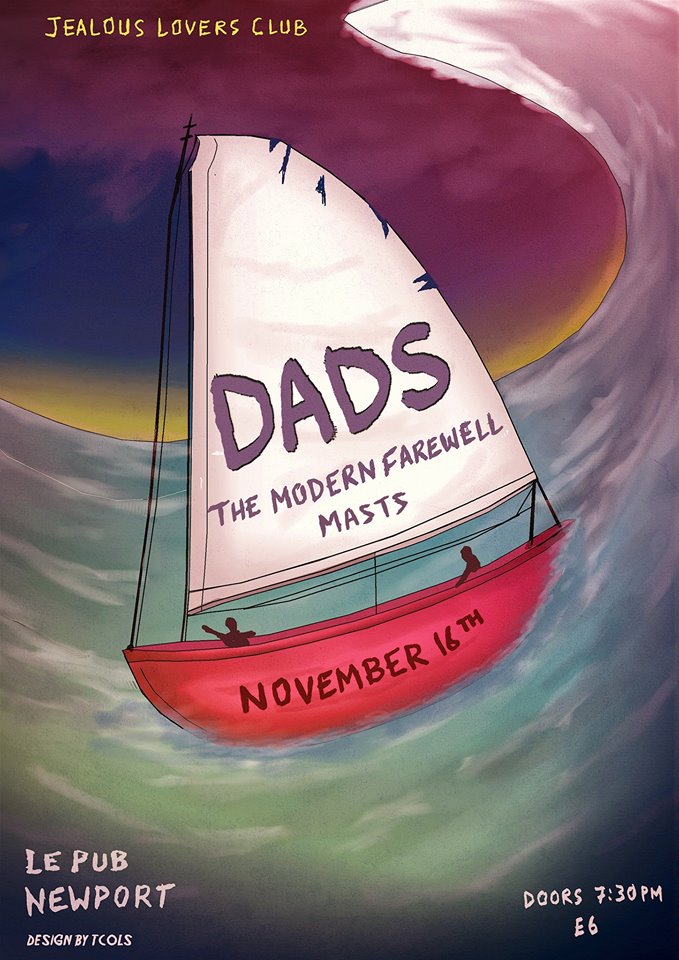 Here at Circuit Sweet we can’t express the love we have for Dads and their label Flannel Gurl Records.
The talented two piece consist of  John Bradley – Drums/Vocals and Scottty Scharinger – Guitar/Vocals. The two piece emo punk band from NJ are regularly featured on our site- last year we had the honor in being the first to listen to their first major full length release ahead of its official release. From that listen we promoted, reviewed and praised the efforts of ‘American Radass (this is important)’ .

From start to finish American Radass resonates in honesty. It’s an honest open record. Dads previous acclaimed EP release ‘Brush Your Teeth, again ; ) ‘ has proved a major stepping stone for the two- as this new release see’s a new light on the musicians. In keeping with their punk roots and bringing their unique ‘Dads’ renowned sound to the mix, this release has captured the maturity in the musician’s abilities, their workmanship together and their overall projection of their creativity.  During the flow of the record, tracks flirt between fast and aggressive to slower compositions, from noodling riffs barraged in the deep projecting sound and its fast scaled uproar to a slower darker, more penetrative orchestration.

In August of this year Dads released a new 4 track EP titled ‘Pretty Good’. Following this Dads recently announced an extensive European/UK tour to which we are thrilled to finally hear and see this duo live!

For those unaware of Jealous Lovers Club they are Promoters of regular nights in Cardiff, Newport & London who bring you a mythical spectrum of music with math rock at one end and indie at the other. To date they’ve put on shows for the likes of Enemies, El Ten Eleven, Gunning For Tamar, Delta Sleep, Rolo Tomassi, Johnny Foreigner, Physics House Band, Native, Dinosaur Pile Up, Talons and Let’s Talk Daggers to name a few. Jealous Lovers Club is also a name you are about to hear a lot more of as we have teamed up to give some extra love and hype to the incredible work being done by the founder. Bringing talent to an array of great venues and for that we are thankful.

Le Pub open’s its doors this coming Saturday for a must see gig.

Dads is a two piece from New Jersey (but at the same time nowhere at all) and formed in 2010. Their blend of melody and rhythm becomes the familiarities that help you through your day, the calm of your anxiety and panic attacks, the unintentional disregard for the future and why you’re afraid of it, the shitty movie you know is crap but put on to forget about everything else going wrong around you. Dads is your loyal best friend and favorite distraction.

Support for the evening will be from The MODERN FAREWELL- a 4 piece punk rock band from South Wales.
‘Jon sings, plays guitar and provides emotional support. Michael plays bass, sings like a choir boy and says stupid things. Neil plays guitar, sings and is the new guy.Dave plays pots and pans, used to play guitar and keeps us all sane.’

And kicking off the evening’s musical antics is MASTS. Masts are a 4 piece punk/post-hardcore band from Cardiff. South Wales’ burgeoning post-hardcore scene has produced another killer of a band in the shape of Masts, who name check At The Drive-In and Fugazi among their many influences.
The guys have assembled an EP of energetic and accomplished post hardcore in the vein of late 90s group Kid Kilowatt, and their criminally underrated Guitar Method album. This means musical dexterity, soul-searching lyrics and a dynamic and considered approach to melody without entering the realm of blandness.

If you are nearby or making a journey to get to the venue on Saturday- it will be worth it.

Make sure you get your ticket now whilst you can. Get your advance tickets here:
http://www.musicglue.com/jealousloversclub/