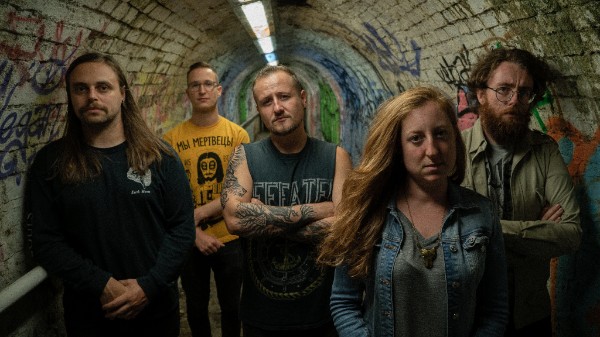 Manchester based expansive and experimental rock 3/4/5/6 piece PIJN have launched their video for single ‘Distress’, which is a one hour film on constant loop with the single ‘Distress’ buried within it. It features manipulated audio from the forthcoming album ‘Loss’ (out Oct 25th through Holy Roar), as well as some of the spoken word contributions we received. There are multiple different versions of the song within the hour, with degradation through repetition to reflect the mental strain of replaying the same moment of experiencing loss over and over again.

A little more explanation behind the project and video from the band themselves – “We wanted to present ‘Distress’ to the world in a way that disrupts the casual, throwaway viewing experience of many music videos. Hearing the song requires direct action and attention from the viewer – because it is hidden within a long, meandering film.  In an attempt to reflect the album’s themes of loss, the film will stream and loop with no option to pause, rewind or reflect. Miss something, and it might take another hour’s patience for another opportunity to listen.  In creating ‘Distress’, we visited beautiful and bleak places around the north west, and tried to capture the industrial-scale loss of nature’s beauty. If it meant breaking in with a camera to get a shot, so be it. We hope you enjoy it.”

The track was given its world exclusive first play last night on the
Radio 1 Rock Show, listen – HERE

The band are set to release their debut album ‘Loss’ through label of the moment, Holy Roar Records (Rolo Tomassi, Conjurer, Svalbard, Møl) on October 25th.

‘Loss’ was recorded and mixed by Joe Clayton, and was mastered by Magnus Lindberg with artwork by Michael Ribeiro.

A little bit about PIJN – Formed in early 2016, PIJN released their debut EP ‘Floodlit’ through Holy Roar Records on January 27th 2017 and have since toured the UK and Europe heavily. With ‘Floodlit’ in its second pressing, new material teased on the live EP ‘Tanzaro House’ and appearances at ArcTanGent, Fluff, Metal Days and Portals festivals, PIJN are set to release their album ‘Loss’ this October through Holy Roar Records.

Live wise, PIJN played at ArcTanGent Festival in Bristol in August, then some shows with Rope in early September and will be main support to Vennart in November. All live dates currently confirmed and announced are below: