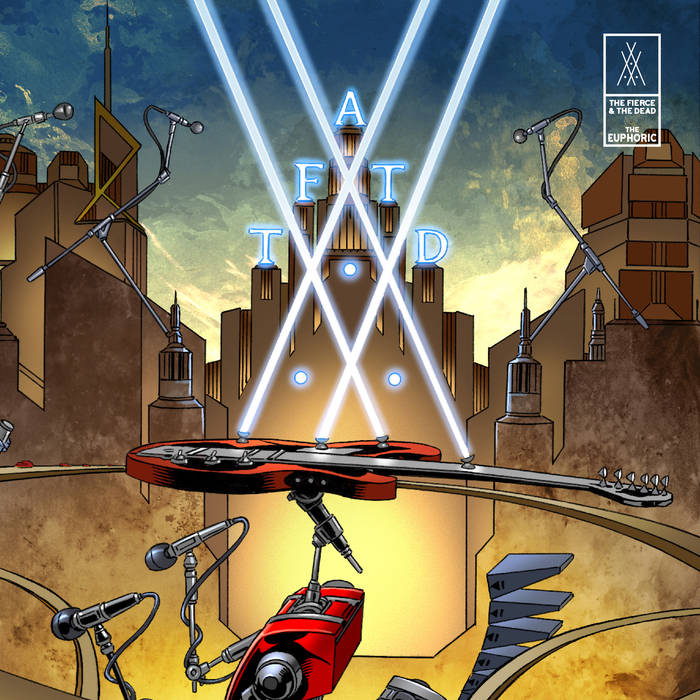 The Fierce And The Dead

The Fierce And The Dead are a band who have been extremely prolific in terms of both their musical output and playing must see gigs, where they have amassed a loyal fan base. That fan base have been rewarded greatly throughout the years and even more so with this album which sees The Fierce And The Dead take their instrumental masterpieces and make them into animated and blissful anthems that will delight all who listen to them.

The opening duo of tracks in Truck and 1991 are a sure fire way to get things off to an energetic start and you cannot help but be swept away by the bands rhythmic lust for life, and the songs cannot help but make you feel elated.

The albums title track injects an element of heaviness and an edge to the proceedings without losing its jubilance while Dancing Robots injects a semblance of progressive funk into its killer groove and all these combine to make a vibrant and compelling sound, something that The Fierce And The Dead excel at.

The futuristic sounding Dug Town adds yet more vibrancy to the album with its anthemic vibes and Cadet Opal, although short in length adds more atmosphere.

The jagged but epic Verbose amps things up even more with its discordant bassline and terrific effects before the album is rounded off with the Primus meets King Crimson like groove of 48k (with certain parts of the song even resembling the theme from brilliant cult animation series Monkey Dust!) and the monolithic Part 7 And 8, which finishes things off on a high with its triumphant nature and pounding grooves that give way to something more psychedelic and is a sublime way to say farewell to the album.

There is a drivenness to the bands music on The Euphoric and one that combines it with an atmospheric nature to create something special with each track revealing a different facet of the music of a The Fierce And The Dead.

The Euphoric is certainly well titled as the joyous nature of The Fierce And The Dead‘s music is well represented here and will delight fans of the band as well as making them a hell of a lot more. This is ecstatic and feel-good music and another sure sign of why The Fierce And The Dead are such a promising band and one of this country’s best kept secrets, although with the quality of what’s on offer here, that is sure to change.

The Fierce And The Dead- The Euphoric, released May 18th and available now.