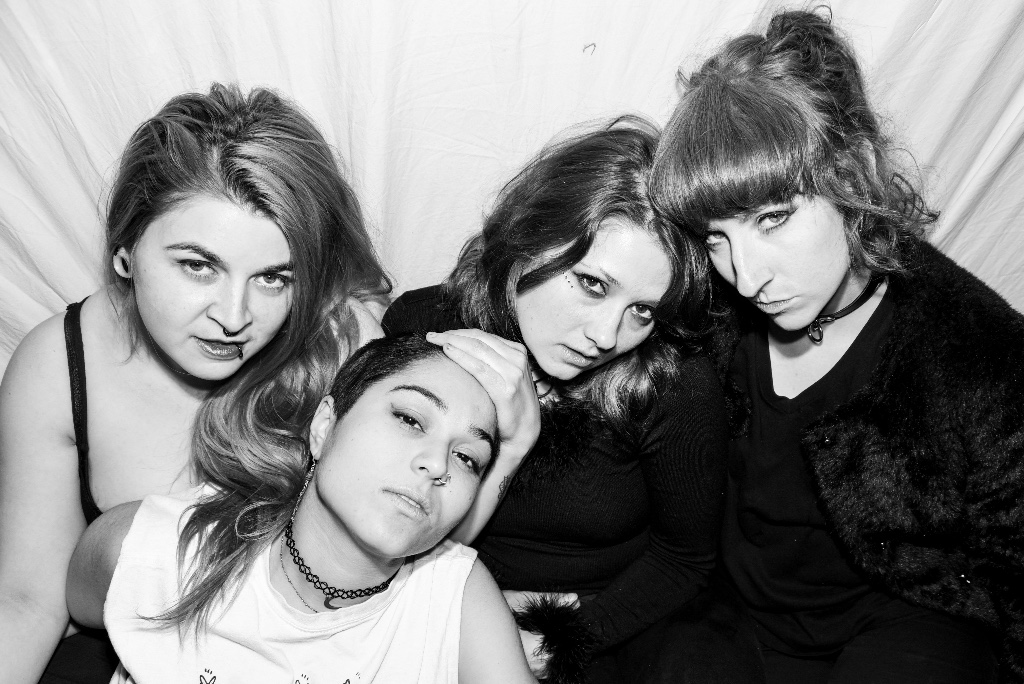 Royal Mountain Records is excited to announce the newest addition to their stable of  artists, Toronto’s Bad Waitress. Joining a roster that includes Mac DeMarco, Alvvays, METZ, PUP and many other talented young bands, the quartet play fierce and rowdy punk rock, citing Fugazi and Gang of Four among their main influences.

Watch the Video for “Acid Brain”

Bad Waitress will release a new EP, Party Bangers: Volume 1 on April 20th and BrooklynVegan is sharing the track “Acid Brain” and accompanying video today. Vocalist/guitarist Kali-Ann Butala says of the track, “Acid Brain is an adventure into multiple dimensions of madness, written and filmed in the aftermath of a two-day acid bender.” Obviously this isn’t a band who pulls any punches, and their wildly fun brand of punk rock stays true to who they are. Bad Waitress recently supported The Bronx on Canadian dates and will play upcoming shows in Canada and Detroit; they are also making plans to visit the States this summer (all tour dates below).

Biography:
Bad Waitress is a fierce and playful punk rock slap to the face comprised of four young Toronto women. It isn’t just a coincidence that they’re all women either: vocalist/guitarist Kali-Ann Butala moved to Toronto from the Northwest Territories five years specifically with the desire to play with other women. The band’s May 2017 EP, Doll Creatures of the Valley, which was mixed and mastered by Kali-Ann, plays along this theme in a cheeky and subversive way, with the biting “We’re Girls,” (“We’re girls/We’re here/We’re ready to fight”) to the witchy chanting of “Devil’s Vagina,” and the EP’s titular track, “Doll Creatures of the Valley,” which begins with eerie, doll-like voices before the heavy guitar takes over.

But it would be wrong to pigeonhole the artists-formerly-known-as-Nude-Dogs as just punk. Their influences may include such punk stalwarts as Fugazi and Gang of Four, with comparisons to acts like 7 Year Bitch and Babes in Toyland, but there’s something a little extra mixed in there, too. Butala’s Howlin’ Wolf tattoo is what she and guitarist Katelyn Molgard initially bonded over. The whole band – rounded out by drummer Eva Moon and bassist Jessica Maxwell – describe themselves as inseparable, and the enjoyment they have from making music together is certainly palpable. Their live shows are vicious and fun, regularly self-booked, and maybe best characterized by the direct missive from their song “Fuck This,” which opens with the chant: “F-U-C-K/What’s the words we wanna say” before launching into the song at full force. The band’s contagious energy would get the point across anyway, but the track is a short, but not very sweet, mission statement: “I just wanna say/Fuck This.”

With a planned release of April 2018, Bad Waitress’ new EP, Party Bangers: Volume 1, moves away from the different vibes of Doll Creatures and into a heavier, party-focused sound, resting on a commitment keep having fun as loudly and rowdily as possible.