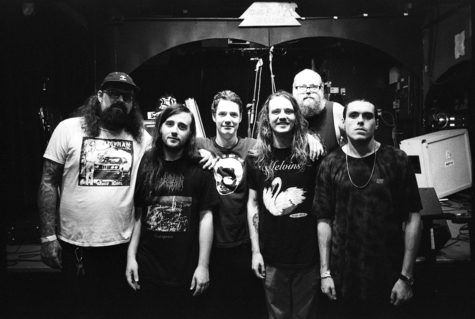 THE BODY AND FULL OF HELL REVEAL A NEW VIDEO FOR THEIR SONG “FAREWELL, MAN”;
ASCENDING A MOUNTAIN OF HEAVY LIGHT IS INCOMING VIA THRILL JOCKEY ON NOV. 17TH

The collaborative force of The Body & Full of Hell is in powerful form on their new album, Ascending a Mountain of Heavy Light, out on the 17th November via Thrill Jockey. Today we can reveal the video for their song “Farewell, Man,” directed by Cody Stauder.

About the video, Full of Hell’s Dylan Walker remarks, “when we were writing “Farewell, Man”, we wanted to encapsulate the free base form of what makes the body what they are and what makes Full of Hell what we are. The structuring is simple and blown out and there’s an extreme variance in tempo. The video was filmed in the Appalachian woods of Pennsylvania. The focus and subject of the video is an immersion baptism, which becomes a drowning. We placed a lot of focus on colour and light in each shot and I think it visually represents some of what’s going on throughout this record.”

Written and recorded in one week at Machines with Magnets in Providence, the music of Ascending draws from unexpected sources such as reggaetón and jungle (“Master’s Story”). There are some familiar guests to The Body fans, namely vocalist Chrissy Wolpert (Assembly of Light Choir) and Ben Eberle (Sandworm), as well as first time collaborator drummer Brian Chippendale (Lightning Bolt, Black Pus), whom both bands share a strong aesthetic of individualism.

Full Of Hell are currently touring across the USA, check out the dates via Facebook. The Body & Full of Hell plan to tour together in early 2018.

TRACK LIST:
1. Light Penetrates
2. Earth Is A Cage
3. The King Laid Bare
4. Didn’t The Night End
5. Our Love Conducted With Shields Aloft
6. Master’s Story
7. Farewell, Man
8. I Did Not Want To Love You So
Pre order link: thrilljockey.com/products/ascending-a-mountain-of-heavy-light

BRUCE SOORD, THE PINEAPPLE THIEF FRONTMAN, PREMIERES NEW VIDEO FOR “ALL THIS WILL BE YOURS”