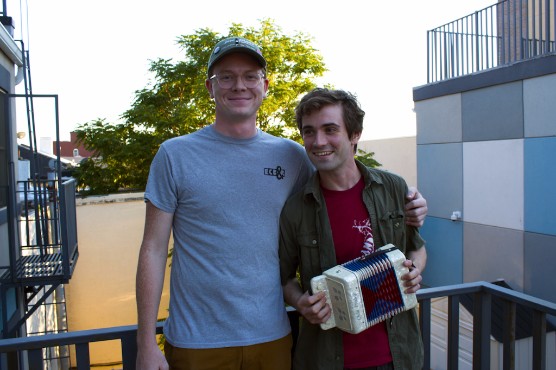 Premieres “Your Guess Is As Bad As Mine”
via Stereogum

Brooklyn’s Washer have just announced their new record All Aboard, set to be released on September 15th via Exploding In Sound. The band is now streaming a new song “Your Guess Is As Bad As Mine” via Stereogum. Stereogum calls Washer “dependable source of smart songwriting and sharp hooks,” saying that All Aboard, “finds them just as nervy and wresting but a little bit more self-assured.” Pre-orders for All Aboard are available now via Exploding In Sound.

All Aboard is an album filled with fuzz, aggression, off-kilter rhythmic structures and mangled pop hooks. Throughout the record, Washer filter complex musical ideas into minimalist garage rock, creating a brilliant and bright sampling of DIY punk. The album was recorded and mixed by Nick Dooley (Flagland, Stove, Bethlehem Steel) at Gravesend Recordings (Silent Barn) in Brooklyn and The Barn in Panton, VT.

All Aboard Tracklisting
1. Forget Everything
2. Elbow
3. Lyin
4. Tooth & Fist
5. Dog Go Bark
6. Feel It Coming On
7. The Scab
8. Afraid To Care
9. Your Guess Is As Bad As Mine
10. The Crow
11. Bass 2
12. Wet Nails
13. Everybody Sounds Fake
14. Shortcut To A Sore Throat
15. Enough Already
Tour Dates
07/22 – Brooklyn, NY @ Joy Palace (solo) w/ Montana Elliot & Nicholas Cummins
07/28 – Brooklyn, NY @ Alphaville w/ Grass Is Green & Lady Pills
08/10 – Brooklyn, NY @ Silent Barn w/ Stove, Rick Rude & Human People
08/11 – Cambridge, MA @ Marsh Post #422 w/ Ovlov, Rick Rude & Lina Tullgren
08/12 – Rollinsford, NH @ Sue’s w/ Ovlov, Rick Rude & Greed IslandBiography:
Much has changed in Washer’s corner of the DIY world since the release of Here Comes Washer. DIY venues like Shea Stadium and Palisades were shut down. Flagland (arguably the band’s biggest influence) called it quits. Things got dark, but there’s always hope. There are always reasons to push forward. Inspired by their peers and the strength of community in spite of opposition, Washer set out to make a more thoughtful, musically complex record with their sophomore album, All Aboard. Built from the heavier parts of personal life and the band’s minimalist dynamics, Mike Quigley (vocals/guitar/bass) and Kieran McShane (drums) leaned further on introspection than ever before.

Due out September 15th via Exploding In Sound Records, All Aboard is another vital dose of minimalist garage rock and fuzzy punk. Brooklyn’s scrappiest pair have done a lot of growing since forming in 2013, and so has their knack for writing clever songs that appear simple on the surface only to reveal complex layers with repeated listens. Their approach is loose and raw, capturing the energy of their live performances with a delicate balance of simplicity and deceptively bent pop anthems. Recorded and mixed by Nick Dooley(Flagland, Stove, Bethlehem Steel) at Gravesend Recordings (Silent Barn) in Brooklyn and The Barn in Panton, VT, All Aboard is a dark album for dark times, struggling with feelings of self-doubt and being generally “full of shit.” It’s not all gloom though, there’s a desire deep within to get better, a specter of light shinning through the shadows.

Washer took their time with All Aboard, allowing themselves more freedom in the songwriting  process as well as recording and mixing, adopting a more collaborative approach together with Dooley. Their mangled pop and primal punk remains as brilliant as ever, shimmering with detached hooks (“Forget Everything”), infectious pessimistic charm (“Your Guess Is As Bad As Mine”). slow building burners (“Feel It Coming On”), tangled structures (“Afraid To Care”), dark mounting tension (“The Scab”), and unpredictable dynamics (“Dog Go Bark”). All Aboard is radiant with inescapable melodies, unflinching purpose, and raw pop brilliance.