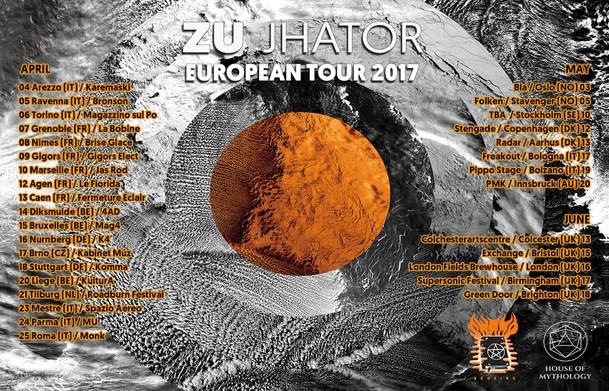 “A Sufi woke one night and said to himself, it seems to me that the world is like a chest in which we are all put and the lid is shut down, and we give ourselves up to foolishness. When death lifts the lid, he who has acquired wings, soars away to eternity, but he who has not, stays in the chest a prey to a thousand tribulations. Make sure then that the bird of ambition acquires wings of aspiration, and give to your heart and reason the ecstasy of the soul. Before the lid of the chest is opened become a bird of the spirit, ready to spread your wings.” – Sufi Farid ud-Din Attar, from The Conference of Birds

Ambition, aspiration and deep soulful explorations are crucial for Zu, who have been broadly questioning and evolving their musical identity for almost two decades, developing their musical vocabulary with every release and collaboration, never allowing their personal and creative freedom to be suffocated by imposed structures and labels. All of their strongest inspirations and artistic reference points have produced a very varied output, evolving (sonically speaking) from one album to another in their respective musical canon. For example, compare say Coil’s Scatology and Music to Play in the Dark or Time Machines, or Feeding of the 5000, Christ the Album or Penis Envy by Crass, and last but not least Pink Floyd and their journey across the first four–five albums; one could be forgiven for thinking it almost sounds like different bands. The same can be said for Zu, who’s musical language has changed a lot over the years, yet the essence very much remains the same. Perhaps then it will come as no surprise to hear that this new musical endeavour stands in stark sonic contrast to their previous albums; the concepts and ideas explored here are definitely not new to Zu though.

ZU JHATOR VIDEO TEASER
For their new album, Jhator, Zu turn to ancient Tibetan funeral practice as their starting point, and much like the practice itself, it can be seen as the beginning of a new journey in a different form. Ancient Egyptian texts, and specifically those unlocked in the book The Dawning Moon of the Mind also inform the direction of the album. The band remarks, “in making this album we have tried to affirm life, beauty and mystery. We refocus the vision in another direction far from the Western point of view.”

Distinguished by two striking extended pieces, the first side ruminates on the three stages of a sky burial, reaching the final part where the soul begins to travel. Created in the spirit of this quote by Peter Christopherson, “as long as I can remember, I’ve approached music from a visual point of view. Any technique that you can apply to a film, you can also apply to a piece of music.” Zu also begin with a filmic starting point, and their vision then slowly revolves into the second piece where acoustic, organic instrumentation and vocals represent for them a soul stripped of worldly attributes, as one begins ones travels into the beyond.

Jhator could be the beginning of a new musical direction for Zu, or perhaps an isolated album capturing a particular essence, or a rite of passage, however their journey unfolds, may it continue to do so for years to come.

“Wonder is the beginning of philosophy” – Wittgenstein
www.houseofmythology.com