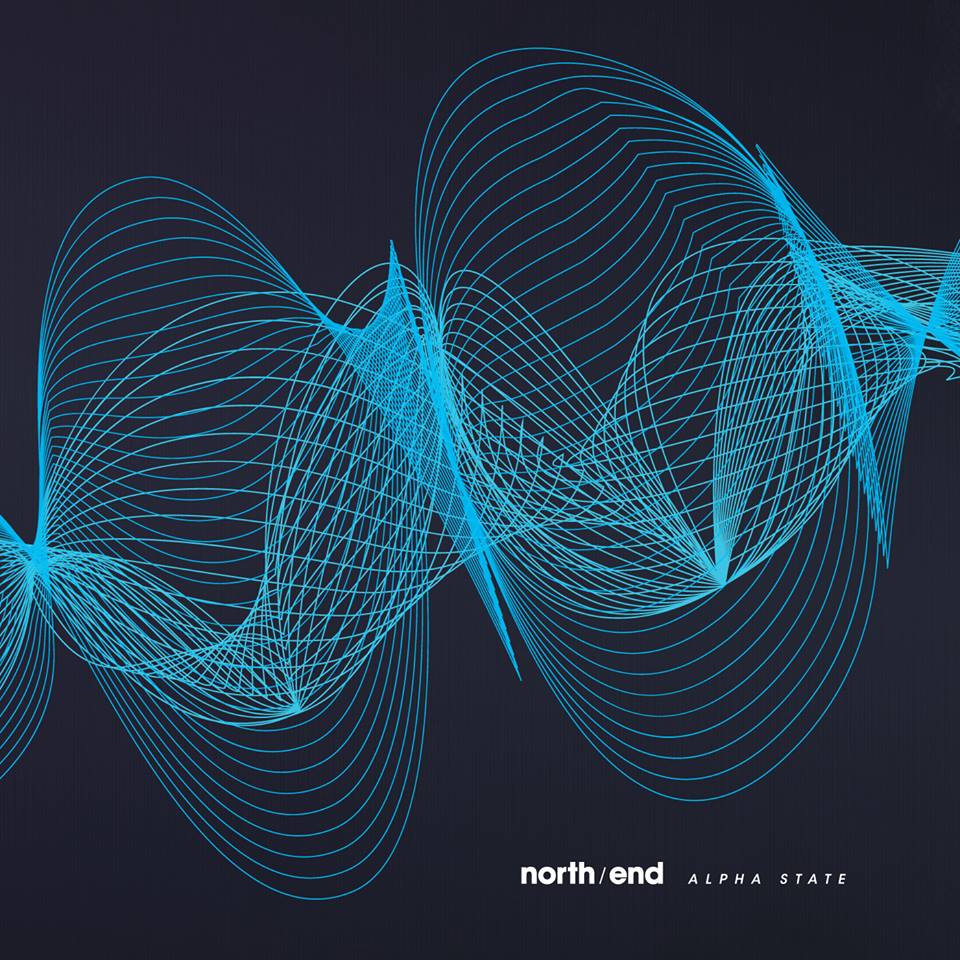 Casting back to 2013 we first introduced the site to the incredible sounds from Pennsylvania 4 piece North End. We discovered their stand out EP release ‘Cognoscere’ which excited us by all means. Now seeing in the New Year with their follow up album release ‘Alpha State’, North End have once again created a record that deserves your utmost attention- it demands to be heard. Consisting of Russ Daniels, Marcus Rodriguez, Kevin Burk and Peter Willis the four have grown together individually and as an outfit, their vision has developed, their song writing matured. As a result the 4 have created a new album of intelligent, layered and uplifting music tying elements of post rock, ambient multi-instrumental passages and some serious drum grooves- an album set to inspire.

Alpha State is set for release January 10th, ahead of the official release date we are extremely please to premiere their long waited album in full, listen to the record below.

From start to finish, North End have created a perfectly contrasting, veracious record which projects the 4 musicians capabilities and creativity. It’s a striking effort which so easily captivates, with solid riffs, impeccable build ups and a tight deliverance. Together they’ve created a powerful atmospheric intense journey. Alpha State is a record which is so gratifying to listen to, 9 tracks that manage to retain meaning throughout all it’s technicalities, whichever way you wish to interpret it the album reveals more on each listen. North End have created a masterpiece- this album was worth the wait.

We are also delighted to spend some time with Marcus on behalf of North End to find out more about this release, their partnership with AM800 sound, their vinyl release and more…

It’s been a while! You guys are no strangers to Circuit Sweet but for those that need reminding, and for all to familiarise themselves with the band, tell us of the background of North End, how did you all get to join forces?

Well the very beginning of the band started with Russ (guitar) and Kevin (drums), they’ve been neighbours since childhood. They played music growing up and then I (Marcus – bass) eventually met Russ in college, and the three of us ended up playing progressive metal for a while. Eventually we wanted to branch out in a different direction so North End was created – a much more melodic project but something that retained the progressive qualities of the past. Then coincidentally, my old high school friend Pete (guitar) reached out to me to start a new project around that time. I asked that instead of starting something new he should play with us and everything worked out. The technical style of playing he brought to the table helped evolve our sound.

When you sat down and North End was born, what did you originally want the band to convey and do you think you’ve achieved this?

We wanted to create something that really was not restricted by boundaries. Also, to compliment the different styles we never want to stay on the same idea for too long within a song. The technical aspect of the music has always held true for all of our albums, and we’re big fans of creating unexpected changes for the listener.

Regarding the forthcoming album, what do you think we can expect from Alpha State?

We put a lot into this release, especially since our lives have become busier and there wasn’t the convenience of meeting up and playing every week. With distance came some new challenges but we were able to still collaborate closely and make something we’re proud to release. From start to finish we believe new and existing fans of our music are going to be excited about what we’ve created. Also, for the first time we’re going to release a limited run of vinyls, we’re really looking forward to that.

What does the final finished product of your 9 track record personally mean to you all?

Alpha State is the culmination of over 3 years of work. Once we released Cognoscere in 2013 we told ourselves that we’d take our time to create it, and not make any compromises in the writing process to get it done. Also, at one point we had to embrace change as I (Marcus) decided to move to Denver, Colorado. Through distance our way of writing evolved and we were able to put together something very special. This album was a huge achievement for us and we can’t wait until everyone is able to enjoy it.

What are you guys looking forward to the most with this release?

We’re finally able to share brand new music with everyone again. Over the last month we premiered 2 video shorts and released our single “Petaluma.” The anticipation for the launch on January 10th is the most exciting part!

With the new release you joined forces with the powerful AM800 Sound- how did the collaboration come about? And how has the unity affected the band so far?

We’ve known the guys in signal hill and No Grove like the Sea for a few years now. We played shows together, became friends and kept in touch. When AM 800 launched, we were all working on records that were on pace to release within 6 months of each other. It really worked out for us. In addition to everyone involved with AM 800 Sound being great people and supporting independent music, we’ve enjoyed being able to collaborate with talented bands that we listen to regularly.

It’s been a while since the last release and you guys have worked hard towards this. Describe the recording/mixing process of the record- the influences/workmanship etc

Drums were tracked in Kevin’s basement, guitars, some keys, and bass were tracked at Pete’s house, and mixes were generated by Kam while in an RV at Yellowstone Park. Then the tracks were mastered by Paul Gold of Salt Mastering in Greenpoint, Brooklyn.

Tell us about your song titles and name of the album, where have these come from?

To be honest we don’t really put too much thought into songs titles, but in this case we designed a concept for the album name. Alpha State is a meditative state of mind one enters before they fall asleep, we thought this was something the listener could relate to. The cover art also coincides with this as we chose to depict brainwaves (thanks to the amazing design done by Rishi Arora of signal hill). If you listen to the closing moments of “Imperial” you can hear the faint sound of rain captured by a single microphone in the park as Kam wrapped up the final edits during mixing. It’s qualities like these that help relate the music to the concept.

Since you announced your return and plans for your highly anticipated new record, how have you found the response of the release so far?

Since we were gone for so long we were incredibly humbled by the response to “Petaluma” and everything we’ve shared so far. There is genuine excitement surrounding Alpha State and it’s even more special because it took so long for us to get here.

For the first time ever we are releasing a limited pressing on a 12” vinyl. We partnered with OneGroove Vinyl to make this possible. This is something we’ve always wanted to do and the artwork came out great, we’re truly excited to be able to share this with our dedicated fans.

What do you feel Alpha State captures?

The Alpha State story is a reflection on how the band has evolved over the last 3+ years, from playing sporadic shows in the NY/PA area to moving around the country to becoming one of those bands that does the long distance writing thing. Previously, we lived within 20 miles of each other, making it convenient to play local shows frequently, write songs, record, and conduct general band business. Now, Marcus (bass) lives in Denver, Russ (guitar) travels frequently for work, Kevin (drums) just had a daughter, and Pete’s (guitar) career has really excelled. Even longtime recording collaborator Kam (keys) worked on Alpha State in his RV at Yellowstone National Park. Life changes quickly, in a positive way, if you let it, and Alpha State is a culmination of these changes manifesting into the style of music we love to write, play and share.

Where will we be able to find the release?

Alpha State will be available on January 10th via:

For those of us this side of the pond who would love to see you guys perform live; how do you project your album and previous flawless material live? And what live ventures have you got in the pipeline?

Currently we’re planning to get together and play a handful of shows to support the album shortly after release next year – more details on that will be announced. Our set will feature a healthy mixture of new and old songs. We’re quite excited to finally show our fans what these new Alpha State tunes will sound in a live setting.

Obviously waiting for the release to drop January 10th but what else are you all looking forward to?

Playing shows again! It’s been over a year since we’ve played live and we’re way overdue.

Thank you for always supporting us Circuit Sweet! It means the world to us and it’s outlets like yours that allow our music to reach new ears. We also can’t thank and appreciate the fans enough for all of the support we’ve received so far on this release. We hope everyone enjoys Alpha State as much as we did creating it.

As this band are about to release one of the best records of 2017 we can’t thank North End enough for their time and involvement on Circuit Sweet. We wish you all the best with the record, the live shows and every opportunity which will follow in the footsteps of this remarkable release..