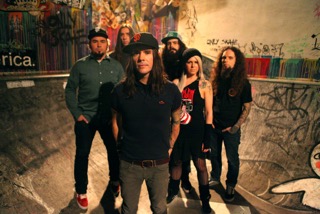 Originally released in 2014 the band are set to re-issue a deluxe edition of their album ‘Between Illness and Migration on 6th May (Graphite Records), their most personal, honest and emotionally visceral work yet.

Mixed by the estimable John Agnello (Sonic youth, Dinosaur Jr., The Kills), and recorded and produced in the band’s own studio (a former catholic church) the deluxe version features 3 brand new additional songs including latest single ‘1-2-3 (One Step Away)’.

The track sees the band in great form, offering their unique blend of abrasive guitar tones and a direct blast of a yet confessional, yet ironic, yet poetic delivery by vocalist Alex Foster. ‘1-2-3 (One Step Away)’ is a perfect glimpse of Your Favorite Enemies’ twisted songwriting mastery, because as you think you had the song’s wayward soul all figured out, the musical affirmative driven drones of guitars turn into a melancholic shoegaze and equivocated noise scenery as Foster offers a sincere inner turmoil of vulnerable poetry that evolves into a raw scream of letting go, offer enough of a bustling gasp for the band to emerge in a high press wave type of sonic hectic shift. Some can present, but no one can fake it. Watch the video now –
Upon the release of the Canadian version of the album, ‘Between Illness and Migration’ rose to #2 on iTunes on the day of its release, and was also #6 top-selling artists in Canadian charts. This comes as no surprise when the bands previous releases have sold as many as 60,000 physical copies.
Your Favorite Enemies spent late 2014 touring across the UK and Europe supporting alternative rock legends …And You Will Know Us By The Trail of Dead. The close relationship with Trail continued in 2015 as Your Favourite Enemies recorded as the backing band on Conrad Keely’s recent debut solo album ‘Original Machines’ which was released in January 2016.
Expect more tour dates to be announced very soon.

!!! (CHK CHK CHK) RETURN WITH NEW DOUBLE-A SINGLE: “UR PARANOID / OFF THE GRID” ON WARP