The Next 12 Months With…

Our next special prying into the future of another aspiring promoter and one we can validate on being incredibly hard working with the right intentions of introducing us all to such a wide variety of talent from across the UK, is that of Rich Lovell and his work in Hereford City Centric amongst other outlets.

We hand over to Rich to find out more about his plans for the next 12 months entertaining the shire….

Firstly Introduce yourselves and your role?

My name is Rich Lovell and I put gigs on around the county on a voluntary basis, to try to help the music scene in this great County. I book acts for and help run the Down on the Farm music festival at Abbey Dore each year. I also play guitar and sing in Punk band Terminal Rage

When and where did your promotions team originate from and what’s behind the name?

The name is Hereford City Centric. It was set up by Michelle Cuadra to showcase the independent businesses and entertainers in Herefordshire. When Michelle found out I had resigned from Hereford Live, she was quick to ask me to join with her to help push the music side of the project and I leapt at the chance.

As a music lover, researching the acts (ie going to loads of gigs and listening to material) is the perfect job isn’t it! It’s always a pleasure to chat to the acts about what they are doing, sharing stories about shows we’ve done, and just being involved in the buzz of it all.

What do you admire about the Herefordshire live scene and it’s community?

It has picked up so much over the last couple of years. As Chair of Hereford Live last year I was in the middle of it  (trying not to hinder it too much!) watching it really grow as more venues took the leap and hosted events and independent promoters popped up. And 2016 looks like it will be a blinder of a year. There is a real diversity and passion in this county, and some great talent too.

What do you hope you can bring to it over the next few months ?

Well our events will go under the banner of the Underground Revolution. We will be putting events on that highlight the more alternative elements of the scene, whether that be punk, post punk, metal, math rock, hardcore, noise, hard edged folk etc. – anything that is a bit off the mainstream really.

What events have you already got planned or penciled in for us to look forward to?

We have a few gigs lined up at the Booth Hall and the Victory, and we are looking to do some in Ledbury which has a great underground scene. We are trying to bring a few bigger names from outside of the Shire too, as well as putting on a Punk 40th anniversary all-day event to highlight it’s DIY culture, diversity, inclusiveness and how that scene has developed over the 40 years – the real story, not the tabloid version, haha!

How can people get in touch should they wish to perform at your nights?

A big thanks to you Naomi at Circuit Sweet, you have done so much supporting a wide variety of acts, you’ve made a real difference and introduced me to some wonderful new music. Here’s to an awesome 2016 showing that Hereford is a city full of culture.

It’s always such a pleasure Rich and it’s an honour that our work introduces you to new music, means we are doing something right! We have seen your dedication for providing the county with the best of events and we look forward to support your new outlet. 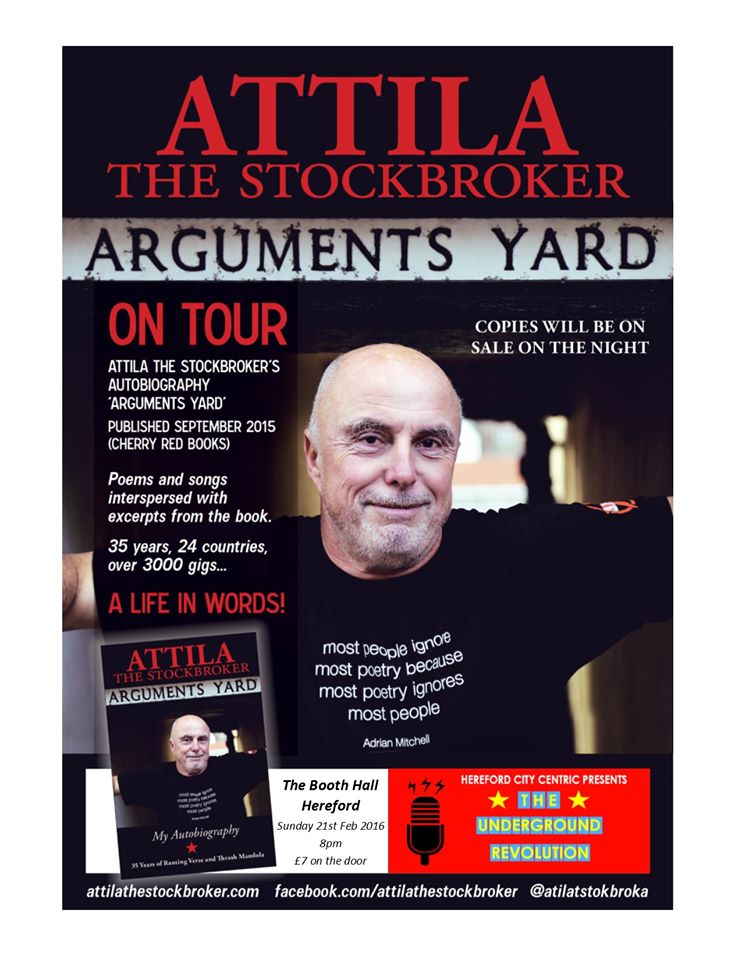 The Underground Revolution are hosting Attila The Stockbroker at Hereford’s the Booth Hall Sunday 21st February. Event Page below.