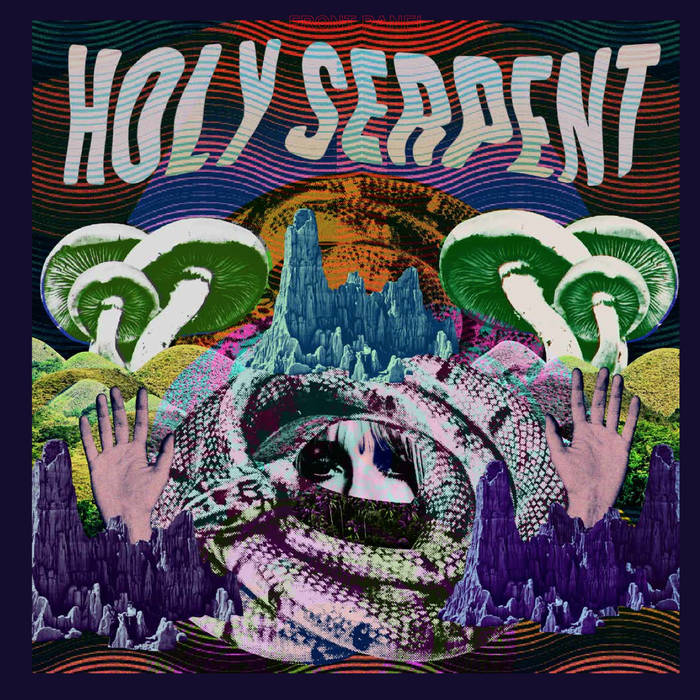 In an age where listeners of music can pick and choose however many tracks in the order they choose to listen to at the click of a button, the art of listening to an album from start to end can sometimes be forgotten but in the case of the self titled debut album from Melbourne psychedelic tinged riff warriors Holy Serpent, you need to be consumed by the entire album which is one hell of a trip from start to finish and utterly consumes you in its vision.

A concept album of sorts, Holy Serpent is an alternate take on mankinds beginnings, of an ancient alien race checking on the human race that they created and returning to see how their experiment is going, the journey of which is told throughout the album and the lyrics to the tracks are quite out there and add to the psychedelic qualities of the music.

Full of riffs that are both hypnotic and monolithic , Holy Serpent take the doomy template started by Sabbath and kick out the fuzzy jams to a whole other level, adding elements of the aforementioned psychedelia as well as riff fuelled garage rock.

Kicking off with their self titled track, Holy Serpent start as they meen to go with the fuzzy and smoke filled vocals and riffs of singer/guitarist Scott Penberthy working well with fellow guitarist Nick Donoughue and the rhythm section of Michael Macfie (bass) and Richard Orr (drums), the instrumental sections work well in the song and the galloping end to the song is a great end to a great start for the album.

Shroom Doom tells you all that you need to know from its title and retains a brain frying rhythm throughout its entirety, Penberthys vocals snake around an altogether shimmering take on the classic stoner rock sound and retain an eerie calmness where you know danger lurks round the corner, this danger comes in the form of the heavy riffs on show that are as blunt as a sledgehammer to the head.

Fools Gold starts with feedback that leads into an all consuming jam that takes you on a wild ride in all of its seven minutes, the brooding bass is heavier than a pair of concrete boots on this one.

Album standout track The Plague is a monstrous, cosmic jam spanning ten minutes that takes you on epic journey to a world filled with sprawling riffs and ethereal vocals. “You can hide your soul but there’s nothing you can do” croons Penberthy at one point during the song and this sums things up perfectly.

Closing track The Wind kicks off with crunching and catchy riffs , pulstating bass and drums and is heavy but with enough of a melodic touch to give it an anthemic feel, the guitars make you nod along enthusiastically, getting more and more mournful sounding as the track goes on but retaining that crunching edge as the track reaches its climax.

Holy Serpent are the latest in a long line of bands who worship the power of the riff and long may they continue and this is an excellent and assured debut.

Rag Foundation album ‘The Sparrow & The Thief’ out now!‏