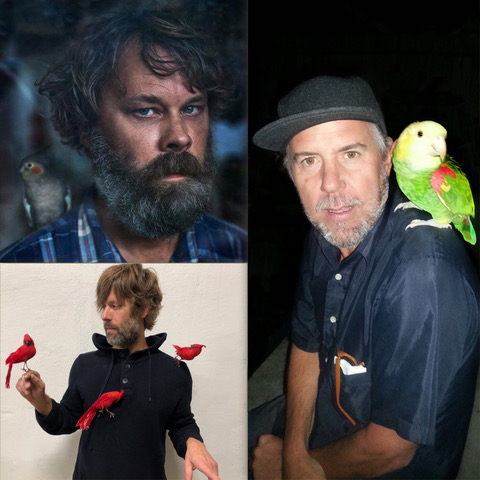 KRAMIES, JASON LYTLE & LITTLE WINGS
RELEASE SPLIT SINGLE: ‘3INGLE’
LISTEN ON BANDCAMP
Three esteemed songwriters, JASON LYTLE (Grandaddy), KYLE FIELD (Little Wings) and KRAMIES have released a new collaborative release: ‘3ingle’.
Setting out to make the first ‘Split-Trio’ or Tri-Single’ as some might put it, with just one acoustic instrument, a voice, one microphone and no studio tricks, each of them wrote and recorded a new song.
Both Jason & Kyle recorded their songs at their California homes, while Kramies’ was recorded at his home in Colorado; creating three naturally honest songs with a comfortable tone which almost bring a feeling of being sat in a living room, listening to the songs being played live. Premiering on the Brooklyn Vegan site, you can listen to the tracks and read more about the release here.
Having worked together on various projects and played shows together, the three songwriters have been friends over the years, building a lot of respect for each other’s craft; which makes ‘Split-trio’ a truly special one-off release.
Jason Lytle – “Color Of Dirt”
Little Wings • “No Suicide”
Kramies ~ “Through the Floor”
Available as a download through bandcamp with a limited run of lathe cut records, this special releases of new songs by Jason Lytle, Little Wings and Kramies see the light of day on November 16th.
https://jasonlytlelittlewingskramies.bandcamp.com/album/3ingle