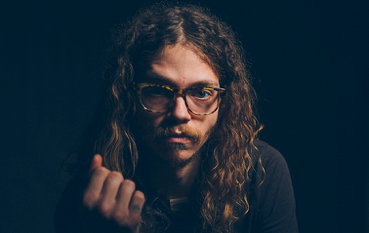 Brent Cowles
November EU/UK Tour with Israel Nash
Headline Show: Thousand Island, London – November 21, 2018
New Album: ’How To Be Okay Alone’ – Out Now
“With music like this, songs this good and artists like Cowles around to light the way, we needn’t worry about having to be alone” 8/10 – PopMatters
“Brent Cowles is one of those musicians you can’t help but root for” – NPR (2018 Slingshot Artist)
“An Americana-tinged rock gem” – Baeble

Denver-based Brent Cowles is set to perform a string of solo shows across Europe throughout November opening for Texan singer-songwriter Israel Nash, including a date at Scala, London on November 22, 2018. Alongside the run with Nash, Cowles will also stop for a debut headline UK performance at Thousand Island, London on November 21, 2018. Cowles will be performing material across the seven date tour from his critically-praised debut solo record, ‘How To Be Okay Alone’, which is out now via Dine Alone Records. Watch the video for latest single, ‘Keep Moving’ here.

Cowles recorded ‘How To Be Okay Alone’ with producer Joe Richmond (Tennis, Nathaniel Rateliff) over the course of six days spent in a rented flat situated on an isolated stretch of Joshua Tree, NV. It was the fruition of a solo project born off the back of a period of intense change for Cowles. ‘How To Be Okay Alone’ is what the Colorado native found himself scribbling in a notebook one afternoon as he grappled with the complexities of a newfound & unexpected independence. His hyper-accelerated, turbulent teenage years had seen him record his first proper demos aged 17 in a friend’s basement and marry at just 18, only to find himself divorced by the age of 19. Raised the son of a Colorado pastor, Cowles then turned his back on an intensely religious upbringing to spend the following years pursuing a successful stint as part of critically acclaimed band You Me & Apollo (with KEXP amongst others tipping Cowles’ ‘Otis Redding and Sam Cooke-inspired vocals’). The band released 2 well-received albums & toured across North America before an unhappy Cowles pulled the plug, questioning at the time everything, including his pursuit of music.

Facing further turmoil brought about by the fall-out of another long-term relationship and an ensuing period of homelessness (which he roughed out sleeping in the back of his Chevy Tahoe), Cowles found the struggle to make it out the other side tempered by a refreshing sense of liberation. Free to pursue his vision with total autonomy, he wrote the kind of music he needed to hear in his life at that moment. The new songs were exhilarating and joyful even as they tackled worry and uncertainty, and when it came time to capture them in the studio, it was only natural for Cowles to strip away any and all artifice and record them under his own name.

Showcasing an infectious sense of melody and versatility with vocals, ‘How To Be Alone Again’ swings from quavering R&B-fuelled intimacy to explosive bouts of distortion that leave Cowles rubbing shoulders with the likes of Alabama Shakes, Sharon Van Etten, and Blake Mills. On album opener, ‘The Fold’ he contemplates the obstacles that hold us back from reaching our potential, singing, “I’ve got questions / and a whole lot of doubt”. These emotions then hang over him, darkening the driving ‘Tequila Train’, which examines the destructive ways we cope with hardship, and keeping him up at night on the rollicking ‘Keep Moving’. The mood lightens, however, with sultry ‘Wire Walker’ spinning the imagery of a tightrope artist into a metaphor for transitioning from a world of co-dependence to one of self-reliance, while ‘Places’ reconciles a strong discomfort with the organised religion of Cowles’ upbringing with the simple fact that he loves his family & friends regardless. Blurring the lines between boisterous indie rock, groovy R&B, and contemplative folk, the music showcases both Cowles’ infectious sense of melody and his stunning vocals, which switch-back effortlessly between quavering intimacy to a soulful roar as they soar atop his exuberant arrangements.

Cowles’ debut EP ‘Cold Times’ made fans of Paste and NPR, who chose him as a 2018 Slingshot Artist – alongside Hatchie, Nilüfer Yanya & Stella Donnelly – and praised him for his “high-energy, thoughtful rock ‘n’ roll.” Since then, Cowles has toured and performed with Nathaniel Rateliff & The Night Sweats, Leon Bridges, and Tennis, alongside performances earlier this year at SXSW.