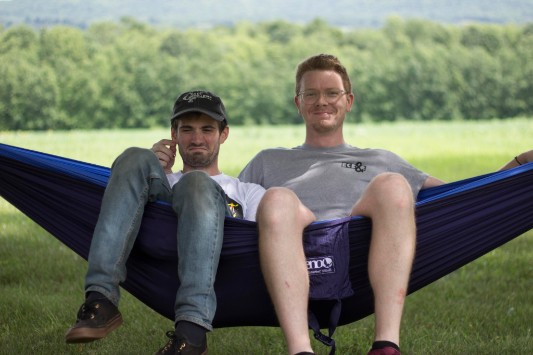 Exploding In Sound Records is excited to announce the upcoming split 7” from Washer and Bethlehem Steel (our first 7” in several years), due out November 30th. Washer’s new single “Super Pop,” a quick unfiltered blast of what makes Washer such a great band, premiered today via PopMatters who say, “One minute and 15 seconds is all singer-guitarist-bassist Mike Quigley and drummer Kieran McShane need to swing from palmed-string bedroom twang to sweaty basement show build-up, to a shout-along chorus worthy of early Superchunk and a final cathartic scream-out.”

It’s super pop indeed, but not in the shiny hyper-produced kind of way, more in the “I may never escape this melody again” way. The band is joined by split mate Becca Ryskalczykof Bethlehem Steel for some great harmonies and just as Washer’s Mike Quigley lets out a furious howl and the whole things feels as though it could spiral out of control, it fades. Covering a great amount of ground in just over a minute, it’s a unique blend of slacker punk, casual twang, and power pop that allows Washer to really thrive.

Speaking about the song, Quigley shared:

“I had been feeling bogged down by a nagging drive to avoid standards of pop songwriting. But sometimes you can kill a perfectly good hook trying to force it into something it’s not. Weird for the sake of being seen or heard as weird can be pretty dull. So we just let this one be what it was. The lyrics came after and in some sense are similar. Starts with a ritual for focusing yourself, trying to change or grow in some way. We can all reinvent ourselves if and when we need to, even if it seems impossible. You’ll be many different people throughout your life. Gotta let yourself try ’em all out.”
Tour Dates with Rick Rude:
11/01 – Brooklyn, NY @ Rubalad w/ Human People, Rick Rude
11/02 – Philadelphia, PA @ BLAMP w/ Rick Rude, Lester, & Missing Earth
11/03 – Baltimore, MD @ The Crown w/ Rick Rude, File Select, & Purrer
11/04 – Richmond, VA @ Cafe Astrology w/ Rick Rude
11/05 – Washington, DC @ Dougout w/ Rick Rude, BRNDA, & Mister Goblin
11/06 – New Brunswick, NJ @ In The West w/ Rick Rude
11/07 – New Paltz, NY @ Crazy Dan’s Second Hand Hardcore w/ Rick Rude
11/08 – Boston, MA @ O’Brien’s w/ Rick Rude, Halfsour & Big Mess
11/10 – Rollinsford, NH @ Sue’s w/ Rick Rude, Notches & High Pony Washer Biography:Much has changed in Washer’s corner of the DIY world since the release of their much beloved first two albums, Here Comes Washer and All Aboard. DIY venues like Shea Stadium and Palisades have closed. Flagland (arguably the band’s biggest influence) called it quits. Things got dark, but there’s always hope. There are always reasons to push forward. Inspired by their peers and the strength of community in spite of opposition, Washer made a more thoughtful, musically complex record with their sophomore album, All Aboard. Built from the heavier parts of personal life and the band’s minimalist dynamics, Mike Quigley (vocals/guitar/bass) and Kieran McShane (drums) leaned further on introspection than ever before.

Released in the Fall of 2017 via Exploding In Sound Records, All Aboard is another vital dose of minimalist garage rock and fuzzy punk. Brooklyn’s scrappiest pair have done a lot of growing since forming in 2013, and so has their knack for writing clever songs that appear simple on the surface only to reveal complex layers with repeated listens. Their approach is loose and raw, capturing the energy of their live performances with a delicate balance of simplicity and deceptively bent pop anthems. Recorded and mixed by Nick Dooley (Flagland, Stove, Bethlehem Steel) at Gravesend Recordings (Silent Barn) in Brooklyn and The Barn in Panton, VT, All Aboard is a dark album for dark times, struggling with feelings of self-doubt and being generally “full of shit.” It’s not all gloom though, there’s a desire deep within to get better, a specter of light shinning through the shadows.

This November, the band returns with a new split 7”, this time together with the impeccable Bethlehem Steel. Recorded once again with Nick Dooley, the bands set out together to record in one whirlwind session, each band recording a new song and a cover of one-another. Joining forces for harmonies and gang vocals, the pair of band’s brought out some of their best work on a record that celebrates both fuzzy punk and friendship.