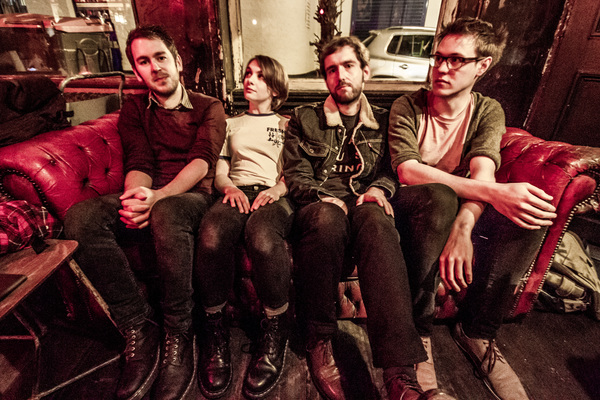 DIY pop punks Fightmilk share their new video for the single “How You Move On”, which is the blistering opening track on their forthcoming debut Not With That Attitude, due out via Reckless Yes on 2 November. God Is In The TV made it their Video Of The Week, calling it; “a kick-ass pop-punk song laced with a two-fingered salute of a chorus that’s catharsis encapsulates conflicted feelings of singing out your lungs after leaving your ex behind.”

On “How You Move On”, Lily Rae sings about a man she was dating who was so incensed whey they split up that he got a tattoo of an ugly tree over his heart to commemmorate the relationship – turns out he had a gallery of bad tattoos of previous conquests. Lily says; “I like to try and write songs that I’d want to sing at karaoke whilst drunk which explains the chorus. It’s entirely designed for post-breakup girls-night-out karaoke.”

Lily explains further about the video: “It was directed by our friend Gemma Grange and in a nutshell: when we started chatting to Gemma I explained that the song was inspired by an ex who, in a very committed expression of dismay, decided he’d get a tattoo to commemorate our relationship after we split up. It was awful. Gemma came up with the concept of having our miserable antagonist as a life-drawing model, delighted at the opportunity to strut his junk in front of a room full of people to impress, only to discover that everyone hates him and is out for revenge. It’s kind of like Kill Bill but with Luke (@beardynoise on Twitter)’s naked butt instead of the Crazy 88.”

Fightmilk hit the road in November/December for a thrilling run of live dates, with delightful supports and strong line-ups, including their free album launch show at The Shacklewell Arms on 2 November, featuring flirting. and Jemma Freeman And The Cosmic Something. They’ll also be playing a Nottingham show with labelmates Chorusgirl as well as Mammoth Penguins.

Fightmilk create sweaty, loud, shouty pop songs about crushing hard, acting out, and running away to solve crimes in Sweden. Blending acerbic lyrics with riffs galore and the urge to dance when you least expect it, Fightmilk revel in a certain inexplicable 90s nostalgia.

The band formed in 2015 when lifelong friends Lily Rae and Alex Wisgard were both made romantically redundant at the same time. In the wake of broken relationships and an uncomfortable year spent living at their respective homes at the age of 25, they realised there was too much angst, too much Kirsty MacColl, and too many drunk nights of making up fake band names for them not to be in a band together. They began writing songs, partly as a way to work out some of their issues and partly so that they could reference It’s Always Sunny In Philadelphia. Moving on from just the two of them and a drum machine called Elton that they couldn’t figure out how to operate, they were joined by Nick Kiddle on drums and Adam Wainwright on bass (who was also handy at piano, cooking dinner and making electronic music in his bedroom under the name of Future Wife).

A joyous gem of a record, Not With That Attitude was recorded at Dean Street Studios in Soho with Keith TOTP across four stolen weekends over a two year period. This gave the band time to hone their songwriting, iron out the kinks and spend time over the mixing, so that it sounded meatier and more polished than their previous recordings. Drawing on bands such as Weezer, Sleeper, The Long Blondes, Martha, Charly Bliss, Diet Cig and Johnny Foreigner, Fightmilk have carved out their own sound and place in the musical universe to add a bit of joy, angst and humour to everyday existence.

Fightmilk
Not With That Attitude
Tracklisting:
1. How You Move On
2. Get A Grip
3. Lucy
4. Summer Crush
5. Dream Phone
6. Not Going Anywhere
7. Four Star Hotel
8. Over
9. Solving Crimes in Sweden
10. Your Girlfriend
https://fightmilkisaband.bandcamp.com
http://recklessyes.com/