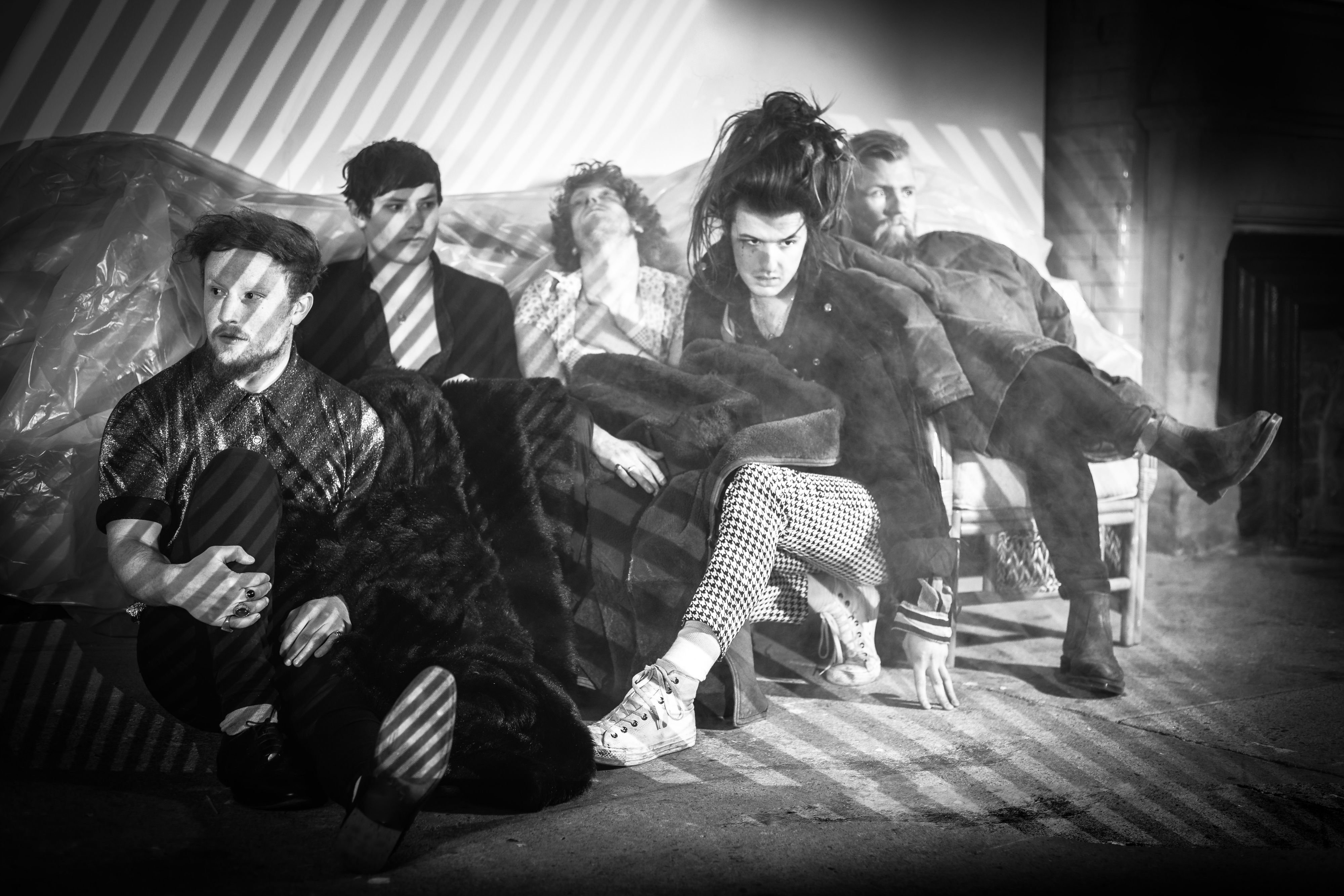 “This song comes from one side of our influences, and there are many more to come. We recorded with Thee Jonny Hooker at Young Thugs Studios in York. Good studio. It’s above a Social Club, so now Glen is an amazing Snooker player and even better dartboard. There was a 60th birthday party going on downstairs during one of the sessions so if you listen closely enough to the 2nd chorus you can hear Cotton Eyed Joe. It was great working with Jonny, we knew him from Fossil Collective firstly and then he and Jared (guitars) worked with each other doing LUUNA. His experience and expertise was invaluable to the process (he’s old as fuk).

The video was shot mainly in Staithes, which is where Kane lives and grew up, and where we rehearse and put gigs on at The Captain Cook Inn. Nice seaside village with lovely alleyways – which we enjoyably ran round until 4am. The locals seemed to enjoy the thrill of the filming, judging from the twitching curtains and glut of late night dog walkers. One unfortunate, wheezing Labrador was walked 8 times in the space of an hour, when the shoot was at a particular peak of high action. One more drone would have been the end for Fido”
– Joe Bell, Bass

Million Dollar Man is released via Clue Records on a limited edition transparent, coloured 7” vinyl. The body of the vinyl itself is etched with a stunning design & each sleeve is also hand numbered. This follows on from their last vinyl release ‘Porcelain’ which sold out in just 3 weeks. The vinyl is available from www.cluerecords.com 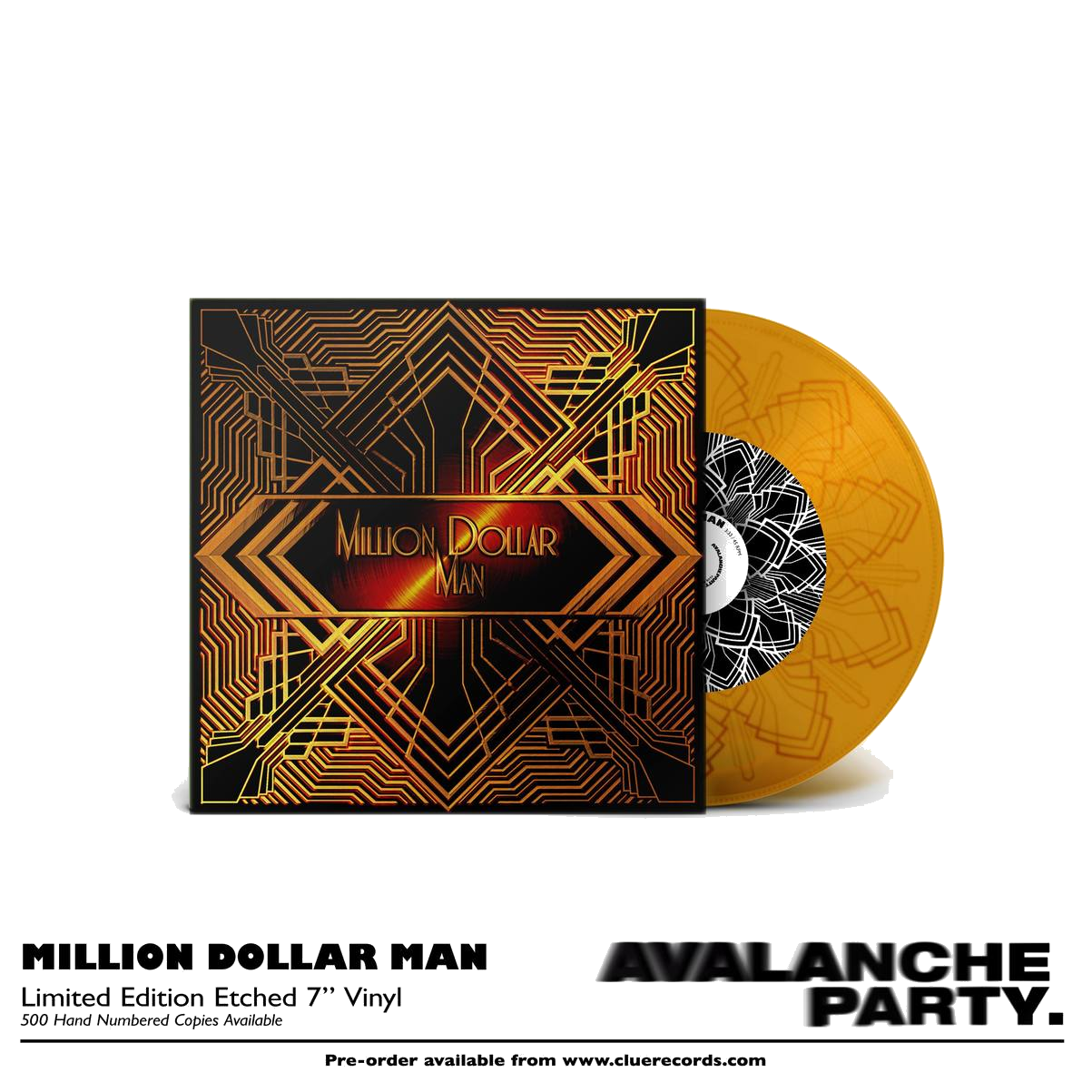 Avalanche Party are in the midst of a rotating UK headline tour with Dutch indie-rock quartet Canshaker Pi. Each date will see the two acts battle it out for the headline slot via a series of challenges. Keep an eye on both bands social media for further news.
“We’ve had this tour on the back burner for a while so really looking forward to playing these gigs. We’ve had a wee break from a very busy summer of festivals and feeling pretty limber for this tour now. Old haunts and new territories. 1000mph. Great to have our Dutch comrades Canshaker Pi along for this dual headline tour lark. How to decide who will headline on what night I hear you all (nobody) cry? We’ll pitting our metal against Canshaker in a series of challenges. What kind? All to be revealed on the tour via our social medias but rest assured there’ll be feats of endurance, feats of skills, feats of bravery, feats of patience, feats of the feet and hands. I’ve heard traditional Dutch board games may feature. Do we make Tiddlywinks great again? Which feline reflex character do we stick in the goal posts and which set piece master do we send forth to glory? Time will tell. And we near the time”
– Joe Bell, Bass 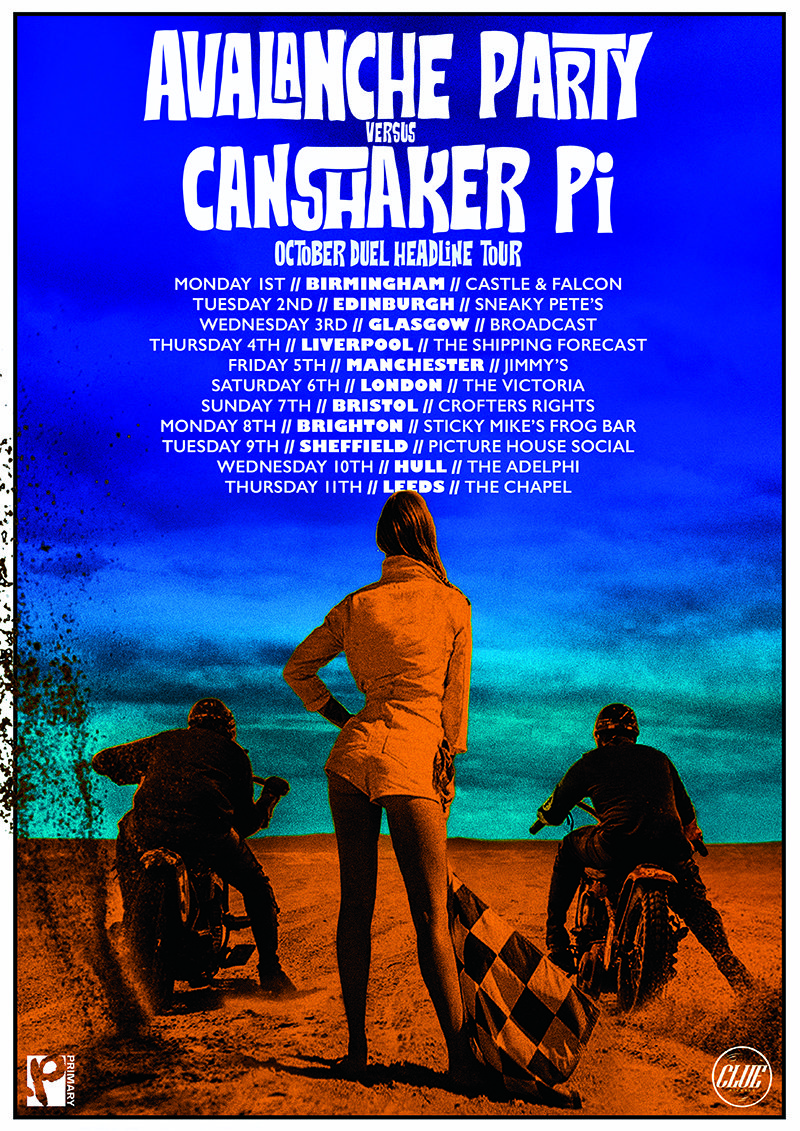 Avalanche Party is the creation of brothers Jordan and Joe, who spent summers in their youth in the Yorkshire dales, camping by firelight, and their winters snowed into their isolated hill top home with nothing but the sounds of Bo Diddley, Link Wray, Wilko Johnson and Jimi Hendrix to keep them company, the boys played their first gig at the age of twelve, and music is ingrained in their being.

Live is where Avalanche Party reign. Their brand of feral garage-punk is intense and immediate, brimming with an urgency that explodes on the stage, every note played through white knuckles, every word spat through gritted teeth. Vocalist Jordan Bell fearlessly parades amongst the crowd, supported by the captivating sonic backbone that is guitarist Jared Thorpe, bassist Joe Bell, Kane Waterfield on drums and Glen Adkins on keys. This undeniable musical chemistry has placed the band at the forefront of the British underground, with recent live highlights including Electric Fields, 2000 Trees, Tramlines and Live At Leeds.

Watch this space for further news on Avalanche Party.