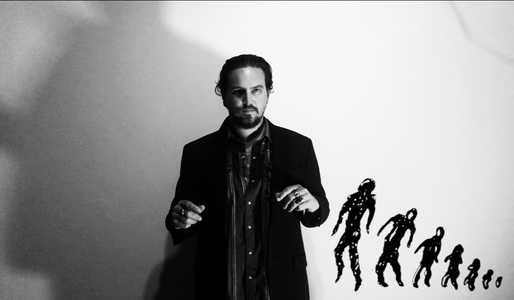 JAYE JAYLE SHARE THE PSYCHEDELIC SYNTH-DRIVEN SINGLE “CEMETERY RAIN”
PRODUCED BY DEAN HURLEY, THE NEW ALBUM NO TRAIL AND OTHER UNHOLY PATHS, IS DUE OUT ON JUNE 29TH ON SARGENT HOUSE

As they prepare for the release of their new full-length No Trail and Other Unholy Paths, the Evan Patterson-led Americana-noir project Jaye Jayle have premiered another new single from the record. The track – “Cemetery Rain” – a propulsive and groove-laden song featuring a Univox Mini-Korg K2 as its lead instrument – is streaming now.

Patterson commented on the song, “The arrangement for ‘Cemetery Rain’ was written on the guitar several years before the idea hit me to transpose the main elements to the synthesizer. Immediately, the entire song took form. As if a UFO had landed in my front yard and one of the greatest mysteries of the world was revealed. Aliens may not be real, but walking in the cemetery… in the rain… is very real. I have lived that.”

Produced by Dean Hurley, David Lynch’s music supervisor of the last twelve years, No Trail And Other Unholy Paths has transcended the album format, elevating itself to a choose-your-own-adventure experience. Patterson notes that the album bears no specific beginning or ending—Side A and Side B are meant to be interchangeable. The album could open with the fluttering instrumental “No Trail,” or the slow burning synths of “As Soon As The Night,” even the spectral push-pull of “Marry Us,” featuring Emma Ruth Rundle’s spellbinding vocals. Regardless of track sequencing, No Trail And Other Unholy Paths is an album that drives its aural dimensions to the absolute threshold — and then some.

In case you missed it, there’s also the smoky, hypnotic track “Ode To Betsy” streaming.
No Trail And Other Unholy Paths is available for preorder via Sargent House here.
No Trail And Other Unholy Paths — Track Listing:
1. No Trail Path One
2. No Trail Path Two
3. Ode To Betsy
4. Accepting
5. As Soon As Night
6. Cemetery Rain
7. Marry Us
8. Low Again Street
“Jaye Jayle is a fantastic, sprawling cinematic exploration of dusty isolation and growling arid torch ballads through a Ennio Morricone prism.” – LEO WEEKLY
“Propulsive songs about the devil and death by car crash abounded… the band’s moody sound struck me as a prime candidate for a Twin Peaks season four Roadhouse band.” – YARDHAWK
“…a devilish meeting of spirits that feels like being adrift at sea, awed by the beauty but a little scared about how you’re getting home.” –PASTE