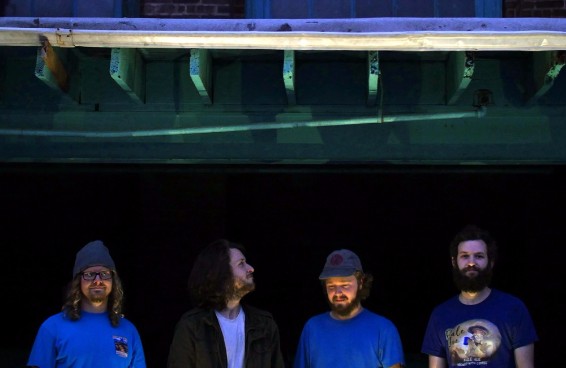 Richmond, VA’s Night Idea are getting ready to release their latest full length, Riverless, on October 13th via Gigantic Noise / Citrus City. The band have spent much of the past year on the road, perfecting their complex blend of experimental pop, prog rock, and widescreen post-punk and it shows throughout Riverless, a record that touches upon everything from King Crimson and Pink Floyd to Deerhoof and Palm.

The 405 are sharing “Gift Horse,” the album’s second single,adding:

“Moving through the complexities of prog rock and creating something awe-inspiring but still catchy can be a tall order, but not for Night Idea. The Richmond, VA-based quartet is preparing to release its latest LP, Riverless, and each new track has highlighted the band’s ability to play with both complex rhythms and intricate melodies. And to say that their latest single, ‘Gift Horse,’ may be their strongest is quite the compliment.

Syncopated rhythms are smoothed out by melodic guitars, keyboards, and vocals in a way that’s both challenging and melodic. Prog rock has seen a surprisingly resurgence this year thanks to bands like Once & Future Band and Elder, and Night Idea’s vision of the complex genre is both intricate and stunning.

In true prog rock fashion, there is a loose concept that unifies the music and lyrics throughout Riverless. Speaking about the themes, Night Idea shared, “the events occur in a different time and place, involving a sudden and mysterious drought and the events that unfold because of it. People become hypnotized and begin disappearing. Part of the fun as the listener is making your own ideas and images to the music.”

“The track provides ample space for instrumental flexing, in particular for a flourishing lead guitar … Based on “Perfect Water” it seems that Night Idea’s new album will have plenty of territory for the listener’s imagination to interact” – Under The Radar Magazine

“Featuring a warped amalgamation of guitars, synths and crooning vocals, the track falls into a world that hovers between ELO, Boz Scaggs and Steely Dan. ‘Gift Horse,’ much like the rest of Riverless, is a rich and intricately crafted tune that will undoubtedly please with its unpredictability and cleverness.” – The 405

“a band whose obsession with odd time signatures, slowly building momentum and simple, chanted vocals make for a serendipitous take on orchestral indie rock. It’s a unique, playful approach to progressively weirder indie rock that is written to awaken and surprise the listener at every turn.” – Audiotree

Night Idea combines complex rhythms of progressive music with melodies of jazz tinged rock, making for unexpected and excitingly original melodic passages topped off with soothing emotive vocals. Known for their impressive live show, they hail from Richmond, VA and have been playing together for seven years.
Follow Night Idea at:
Facebook