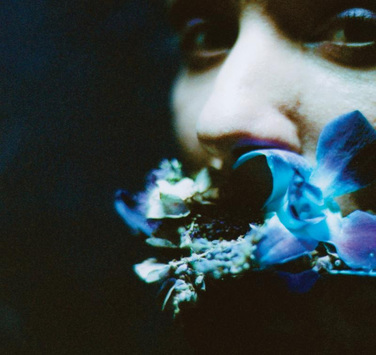 Drag City is pleased to welcome Circuit des Yeux to our roster with the October 20th release of Reaching For Indigo. Vocalist, composer, and producer Haley Fohr has been Circuit des Yeux since she was eighteen years old. Born in the Year of the Dragon in Indiana’s own “Star City” – that’s Lafayette, IN! – she released records regularly over the past two decades, including four full-length albums, along with several mini-albums and singles. And all the while she has played shows everywhere, bringing her sounds to the far -(and near-) flung cities of Earth. She has been based in Chicago since 2012.

The records and shows have been done in primarily DIY fashion, as a means of navigating the world, genuflecting with Sagittarian energy. Circuit des Yeux reflects from a singular angle, looking deeply, at times unblinkingly, at connections and collisions of the cerebral and the physical, with a sense of colloquial grit and an equally opaque transcendent spirit in both her words and her music.

Tune in and drop out to the video for “Paper Bag”, curated and edited Meg Remy, below and await Reaching for Indigo’s release on October 20th.