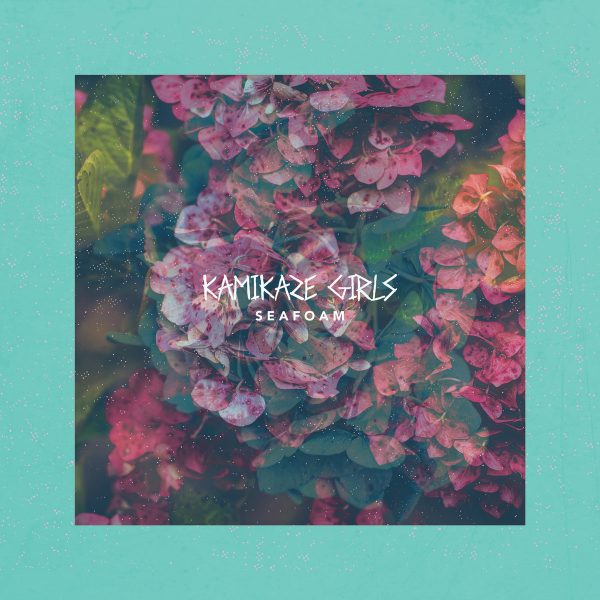 Following on for last years excellent SAD EP, Kamikaze Girls follow it up with their debut album Seafoam. The Leeds duo that consist of vocalist/guitarist Lucinda Livingstone and drummer Conor Dawson amp up the promise that they have previously delivered and with this album deliver a fresh and vital album full of triumph and vitriol in equal measure with their Riot Grrrrl influences still at the forefront of their sound.

The lurching One Young Man opens up proceedings and it is clear from the off that is going to be a just as heavy affair from the band both sonically and lyrically as the release that preceded it with this harrowing, cathartic and startling offering.  The startling nature doesn’t let up with the furious Berlin and the murky but upbeat Teenage Feelings. Good For Nothing slows the pace down but doesn’t waiver the bands sound one bit and shows a different vibe from the band and this is flows nicely into the furious KG Go To The Pub (a song that features Ren from the brilliant Petrol Girls) which emits pure vengeance which lets loose at misogynistic men and features the admirable warning and call to arms “Grab my waist and I’ll knock your fucking lights out. You knock me off my feet, but not in the right way, I was just walking past, I’m not your fucking sweetheart mate” that would make Kathleen Hanna proud. This song highlights the sort of behaviour that not only needs to be addressed but also completely stamped out and Kamikaze Girls should be applauded for doing just that. The rest of the album is a bit less vitriolic which seems necessary with the hazy Lights & Sounds and the optimistic Deathcap offering changes in dimension as do the beautiful Weaker Than and the shoegaze burst of Unhealthy Love but all are delivered with the bands attitude and lust for life bursting out from the speakers, something the album does in spades. Seafoam commences with I Don’t Want To Be Sad Forever, an initially downbeat way to end the album but one that rises through the sadness to emit a hopeful feeling by  its conclusion (despite its refrain I don’t want to be sad forever…but I probably will be sounds like a cry for help but that help is thankfully there) and this ends the album on, maybe not a High but a satisfactory conclusion.

This is an album that addresses a lot of important topics and all are delivered with maturity, subtlety, aggression or a mixture of all three which makes Seafoam essential listening and shows that Kamikaze Girls are developing into one hell of a band.