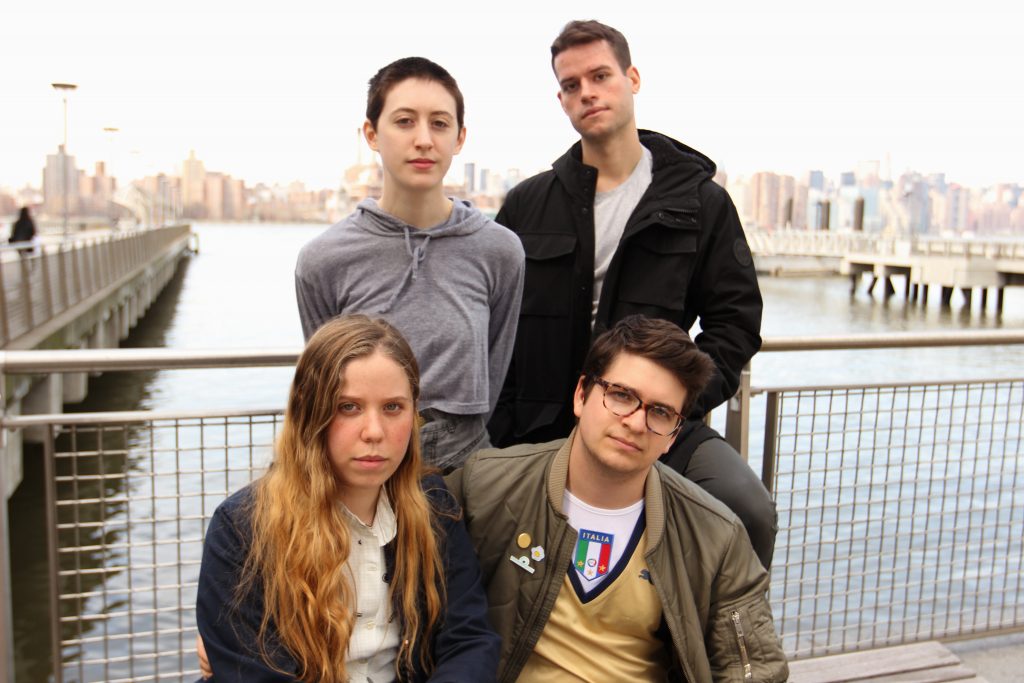 The band is currently working on new material and will tour the UK and Europe this summer, which will include stops at Indietracks Festival in Ripley and Visions Festival in London. Please find a current list of tour dates below.

The first studio release as Frankie Cosmos, Zentropy (Double Double Whammy), garnered wide acclaim upon its release, including New York magazine’s #1 Pop Album of 2014 and a Pitchfork Best New Track for “Birthday Song.” Recorded as a two-piece with Aaron Maine on drums, Frankie Cosmos began performing live as a three-piece with Aaron’s brother David on bass, and later as a four-piece with Gabrielle Smith on keyboard. The next studio release, 2015’s Fit Me In EP (Bayonet), combined Kline’s honest, lyrically-driven songwriting with Maine’s affinity for synth-driven production, and earned the project another Best New Track for “Young.” Lauren and Luke joined the group in late 2015 on keyboard and drums, leaving Gabrielle and Aaron to pursue their personal projects—Eskimeaux and Porches—and cementing the band’s current lineup.

The group’s most recent release is the critically-lauded Next Thing (2016, Bayonet), which has been praised for memorable lyrics that are both clever and concise, deeply personal and widely relatable; beautiful three-part vocal harmonies that enhance catchy pop melodies; and increasingly sophisticated instrumental arrangements that reflect a rapidly maturing band continuing to grow. The album received a coveted Best New Music designation from Pitchfork as well as exceptional reviews from the New York Times, Rolling Stone, and others. The band’s live show, honed during extensive touring of North America, Europe, Oceania, and Japan, has also received glowing feedback for its mix of energy, intimacy, and levity.

In their off-time, the bandmates of Frankie Cosmos practice a variety of other jobs and hobbies including textile design, food journalism, massage therapy, cooking, mixed martial arts, reading, painting, and petting dogs.

What people have been saying about Frankie Cosmos:

Ms. Kline’s songs don’t last long, and neither does her imagery, but she can be exceptional at capturing how quickly frail things can break, taking devastating turns in just a couple of lines. – NY Times

Many of the songs (“Embody,” “On the Lips,” “Too Dark” and “Sleep Song”) on the album have appeared in acoustic permutations in past work, and they make the leap seamlessly. Each are marvelously well.wrought trains of thought, cramming existential questions into the banality of everyday moments and finding something beatific even in the plainest of things. – Pitchfork

There are no answers, no solutions to any problems, and no gateway doors through escapism, but for half an hour the record shines a light through confusion, and just for a while, it doesn’t have to feel like such a loss to be lost. – DIY Magazine