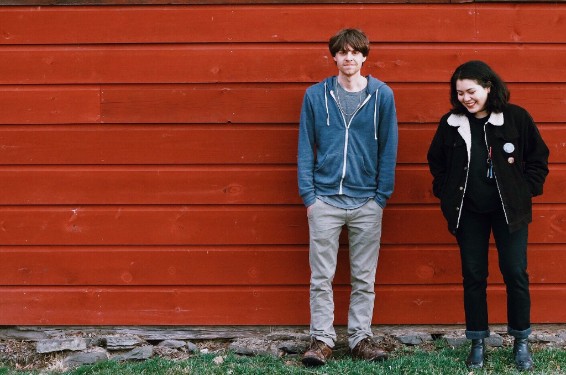 Exploding In Sound Records is thrilled to launch the EIS Tape Club, a year long cassette subscription service. Set to release a new tape every other month, the label was inspired by the incredible amount of amazing new music they wish they could release. “The EIS Tape Club is a celebration of independent music, new artists, and the pursuit of finding your next favorite band.”

Long Island, NY’s Anna Altman are set to release the inaugural cassette in the series, the duo’s full length debut, Freightliner. Due out April 28th, Anna Altman’s Lucia Arias and Christian Billard (both of Turnip King) create gorgeous melodies and tangled minimalist arrangements; simple songs that are filled with atmosphere and Arias’ stunning vocals. There’s a serene beauty in their hypnotic music, built on repeating structures, colorful patterns and radiant lyrics. Reminiscent of Liz Phair, The Breeders, and Bedhead, Anna Altman are creating their own inward escape.

Speaking about lead single “The Interview,” Impose called it, “a beautifully monotonous set of instrumental patterns that serve to bolster the ponderous voice of singer Lucia Arias in a way that is more powerful in its subtlety than its force.” Digging further into the song, they shared:

“It’s for the attentive art audience. Like an Agnes Martin work, the colors blend between Arias’ two-toned picking alternations, almost too perfect to be real. Christian Billard’s easy-riding mechanic percussion harmonizes with the mixture all too seamlessly, a calm and cool and invariable voice of its own. It’s a gorgeous balance, meant to be sat with for a moment, meant to flow over, across and through you.”

Anna Altman, the project comprised of Lucia Arias and Christian Billard, gently packs a punch with their debut LP Freightliner. The album was recorded reel to reel at Billard’s house in Port Washingon, Long Island, and recalls feelings of racing alongside blurs of scenery, in a car or on a train. For this, Freightliner is adequately named. Arias’ vocals, at times tinged with reverb, are sturdy and melodic. On songs like “American Gothic,” Arias’ gentle and overflowing guitar bends around these vocals, braiding and weaving together. Steady and skillfully marching drumbeats create a constant beneath vivid scenery, like running your fingers along a wrought iron fence or watching sea foam ebbing along a shore. Anna Altman runs as cool and deep as a river, it is ghostly and repetitive, yet comforting in its patterned sounds.

Anna Altman’s songs seemingly evolve and then scale back over and over again within each composition. Winding roads and complex routes cut back to skeletal beats. By the time we reach the penultimate title track, the reel to reel is wobbling as if we have lost the way. Yet, the finale holds a concluding harmony in Arias’ voice, the duo overlapping and playing tag on it’s final notes. Like being jostled awake from a deep sleep, Freightliner ends firmly with sparse, jarring chords. It’s strange, but it all makes perfect sense.