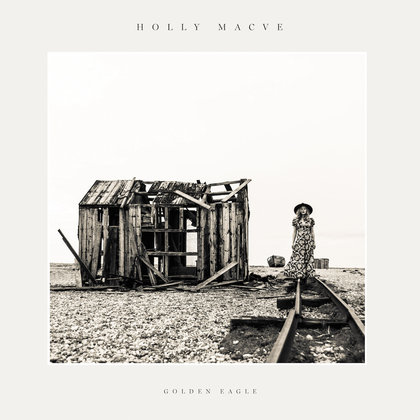 Golden Eagle, the much anticipated debut album from country balladeer Holly Macve, is a collection of songs that are fraught with emotion, heartfelt sentiments and mournful glory. This is a singer who wears her heart in her sleeve and isn’t afraid to let her emotions ring out and the whole experience of listening to Golden Eagle is a journey that will inspire you and break your heart in equal measures.

With a voice that bears a certain similarities to a much more downbeat Gillian Welch or at times, a mournful Klara and Johanna Soderberg from First Aid Kit, Macve spills her heart over the albums ten tracks. Golden Eagle opens with the reflective White Bridge and what follows is her voice taking command over an intentionally sparse musical backing, mainly containing of the gentle strum of the acoustic guitar, some well placed piano and violin and some kindly backing vocals. That voice though is the main attraction and it quivers with emotive goodness as the lyrics come forth. The heartbreaking qualities are aplenty but even the tales of woe have a certain beauty about them and this makes for a gripping and contemplative listen. Tracks like The Corner Of My Mind and Shell are wonderfully stirring songs that make should make anybody sit up and take notice of her talents while Heartbreak Blues rings as true as its title.

The albums centrepiece and utter highlight is a masterpiece of hope and sorrow and anchors the album entitled All Of Its Glory. A heartbreaking vocal is placed over a gentle strum for the tracks entire five minute duration and is as stirring and emotional as it gets but despite its initially downbeat nature has a hopeful and life affirming quality to it. The tracks that follow such a gripping song, Timbuktu, Fear and No One Has The Answers have more of a sunny disposition and more of a traditional country feeling to them and highlight that voice in a different but no less successful way.

The album conclude with two sprawling tracks in the albums title track and closer Sycamore Tree. The former marks a return to the more downbeat fashion of Macves range initially but morphs into something more upbeat and the latter ends things on a sunny flourish that finishes the album off in a fine style.

With Golden Eagle, Holly Macve has marked ourself out as a talent to watch and with a voice as good as hers, she is definitely a singer you will be hearing a lot more from in the future.