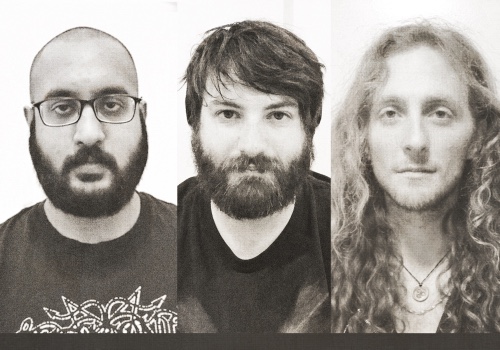 Formed in May 2012 by guitarist/vocalist Ben Ianuzzi and drummer Ian Murray, along with former Alkahest members Nikhil Kamineni and Jon Powell, as one of 2017’s most exciting new prospects Mountain God’s time is almost upon us.

Experimenting with raw concoctions of doom and ’70s psychedelic influences, their commitment to channeling ill feeling, heavy rock, deep meaning and dark subject matter is unwavering. In 2015 Mountain God followed the release of their five-song EP Experimentation On The Unwilling (2013) with the sprawling concept track ‘Forest Of The Lost’; a devastating, doom-infused laudation of distorted sludge, ambient noise and stoner rock. Rolled out to crushing effect, The Obelisk fittingly noted that, “Their particular brand of atmospheric sludge has only become more visceral over the last couple years, and as expansive as their 2015 single-song Forest Of The Lost EP is, its churn still seems to stir the guts.”

Following the departure of Powell and Murray, Thera Roya drummer Ryan Smith was drafted in as the trio set to work recordings that would form the basis of Bread Solstice, their full-length debut and first outing for the Houston-based record label Artificial Head.

“While some of the songs date all the way back to 2013, we didn’t begin rehearsing them regularly until Summer 2015,” explains guitarist Ianuzzi. “We started out demoing, writing, and tearing apart the ideas until we had things we liked. We definitely wanted to push the envelope with more nuanced effects and fewer 4/4 time signatures.”

Around this period the band also became a steady fixture on the NYC metal scene performing shows with the likes of Ufomammut, YOB, Primitive Man, Naam and Kings Destroy. Threatening spaced out and progressive paeans in the mold of Wolves in the Throne Room, Neurosis and Candlemass, as angry and complex a beast as Bread Solstice is it’s also deeply immersive and hypnotic in its atmospheres. Much like their early EPs and recordings, while creeping keyboards swell on tracks like ‘Unknown Ascent’, elsewhere riff-heavy tracks like ‘Nazca Lines’ and ‘Junglenaut’ hammer down hard with an iron fist. As Artificial Head founder Walter Carlos points out:

“I just knew I wanted to work with the band on a release. Their music reminds of the sludge and experimentation of bands such as Skullflower, Splintered, and Ramleh. Big, crushing emptiness with grinding tempos. Their new album, Bread Solstice, continues in that epic darkness.”

Bread Solstice will be released on vinyl/digital through Artificial Head Records on 24th March 2017. Listen to ‘Nazca Lines’ here – http://www.nocleansinging.com/2017/02/23/an-ncs-premiere-mountain-god-nazca-lines/