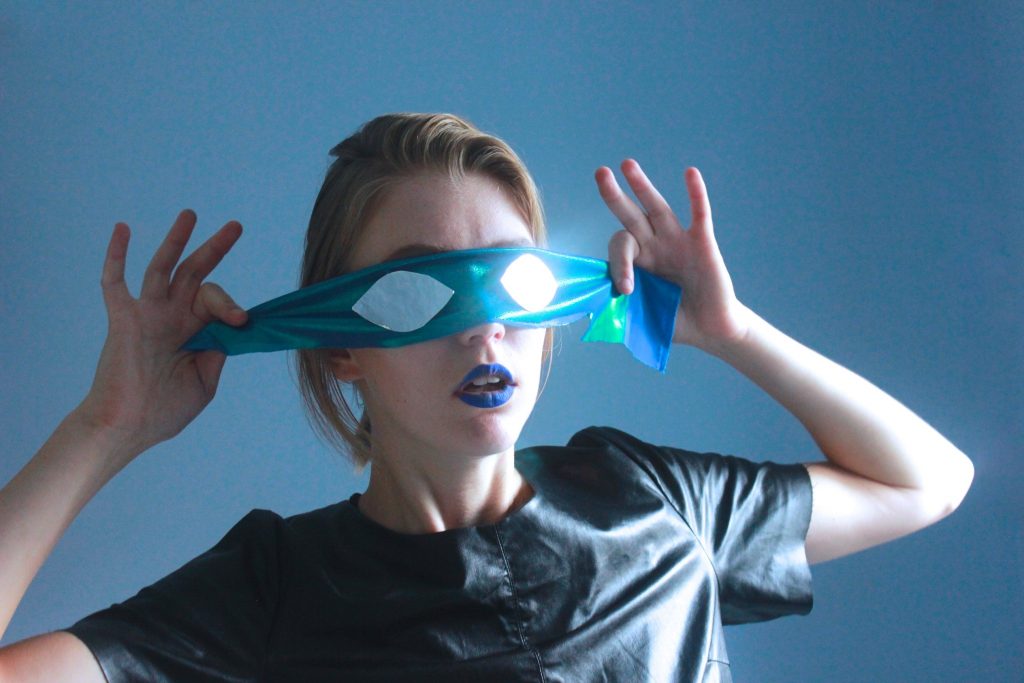 Part Of File Under: Music’s “One Song At A Time”
Video Singles Series

Wallgrin has just released the stunning new music video for “Ae’aea” via Impose Magazine. The single is released as a part of Vancouver label File Under: Music‘s new bi-weekly video single series One Song At A Time. The stems from “Ae’aea” are available for remixing. The experimental art-pop project of composer, violinist, and vocalist Tegan Wahlgren, her music is unique and visionary. Wallgrin blends dance music with elements of traditional folk and Celtic pop, relying on her soaring vocals to create an otherwordly atmosphere.

“Directed by Matt Leaf, who collaborated with Wallgrin on the concept for the video, “Ae’aea” begins with a thundering waterfall, setting the dramatic tone for the song and its visual counterpart. As Wallgrin’s gorgeous vocals float over the notable, throbbing percussion, she almost floats across the fallen leaves in a thick, green forest, the beautiful foliage”

The series began on October 4th with Skye Wallace’s “Not Ready For This To Start” followed by Johnny Foreigner’s “Flooding” and Pill Friends’ “Holy Like You”. One Song At A Time will continue through March 21st, with FU:M releasing a new music video on their YouTube channel every two weeks. The series will feature music videos for unreleased tracks for artists from Canada, the UK and the US, including Slam Dunk, Slime Girls, Crywank and more. All of the songs are available worldwide digitally, and will be collected at the end of the 12 video cycle into a compilation. The stems for each track are also available for remixing opportunities via the labels Skio Music page.

Wallgrin is the experimental art-pop solo project of composer, violinist, and vocalist Tegan Wahlgren. With a background in choral singing and Celtic fiddling, Wahlgren has evolved into the mutant, undiscovered bird species she always intended to be. Now, Wallgrin delves into the space between extremes of beauty and dissonance, expressed through layers of strings and exploratory human vocals. Her self-produced recorded material incorporates a variety of eclectic instruments, drum machines, and field recordings, while her live show consists mainly of violin and vocal looping. She has performed at TEDxVancouver, Launch Festival for emerging artists, and was a runner-up in CiTR’s Shindig. Wallgrin is now working on a debut album entitled Bird/Alien, to be released in early 2017.

The video was made by director Matt Leaf, who has previously worked with Hedley, the Pack A.D., and also with File Under: Music on videos for NEEDS. He and Wallgrin collaborated together on the concept for “Ae’aea”‘s, before heading off together to transform the woods outside of Vancouver it into a familiar yet alien space. Matt Leaf describes the video as, “a surreal and beautiful journey into a parallel universe. Our protagonist transcends through an enchanted forest, exposing a world of beauty and danger. Following the voice of a Siren, she is drawn to the cold and mysterious waters deep within the canyon…”

Regarding her inclusion as a part of File Under: Music’s “One Song at a Time” singles series, label manage Steve Mann has this to say:

I first saw Wallgrin randomly at last year’s CITR Shindig (campus station 30+ year running battle of the bands, where Japandroids once fought for their own glory,) and Wallgrin more than held her own alone with her vocal and violin loops vs a noise pop and a psyche pop band. I was completely blown away, but afterward I couldn’t find any music from her. Fast forward to seeing her again in the summer, and this time there were a few tracks that demonstrated that this wonderful live performer also had some interesting production chops. Luckily she had a new track about ready to go for our One Song at a Time series, because she is exactly the kind of artist with the kind of track we were looking for, fresh, exciting, just a little taste, that hopefully sets her up for her own release of Bird/Alien in 2017.