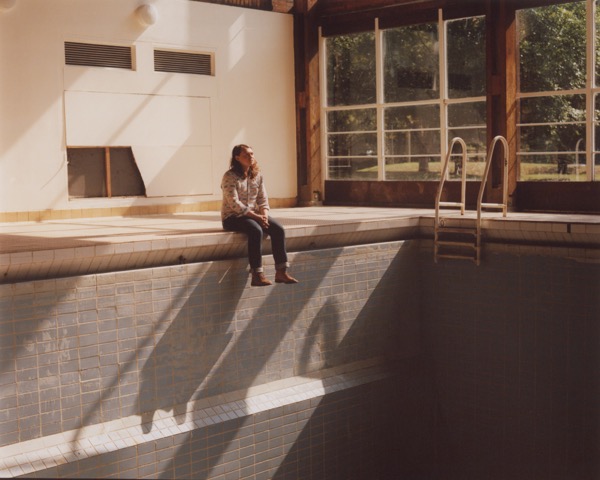 As curious a moniker as it may seem, the name Toothless comes from a Raymond Pettibon drawing. The US artist (infamous amongst the 1980s LA punk scene for his gig posters) drew a tiger biting off a boy’s head with the caption, ‘Even toothless, she can still bite off a boy’s head.”  The idea of something being toothless, but still having bite struck Ed as strangely compelling. Nobody expects ‘side projects’ to achieve very much, especially the side project of a bass player (Ed is bassist of Bombay Bicycle Club), and so the name stuck.

To all intents and purposes, Toothless and his debut record has been a creation carefully conceived by its maker. Even the theme of the singles and album artwork, a play on the famous Power of Ten video by Charles and Ray Eames, has its own narrative.

The 1977 film explored the exponential power of ten by zooming skyward, originally focused on two people enjoying a picnic, to interstellar space and back again, right though the couple’s bodies and arriving to the atomic level. It’s a fascinating graphic look at the scale of relationship between our universe and the molecular/atomic and sub-atomic world in which we live. Ed’s take on his artwork loosely follows the film, envisaging each separate piece of art to be a ‘still’ from the film where over the course of the campaign, fans see a world where everything is connected and related, capturing moment and scale.

This attention to detail handed to the artwork can be equally measured across the record too, given as it is to the idea of scale and the passing of time. Mythology and astronomy become staple touchstones in Ed’s lyrics too. Track titles Sisyphus, The Sirens, and Midas Touch focus on the former, whilst The Sun’s Midlife Crisis, Terra, and Charon, the latter.

Concepts and context aside, The Pace of the Passing is a beautifully realised, and carefully constructed record. You can hear a delicious sense of leftfield playfulness in the melodies across the whole album, and rather than obscure them with fuzzy noise, or layer them up with guitar on guitar, Ed just allows them to radiate and glow in their own simplicity.  It’s a charm he employs on both Charon and Sisyphus, the opening numbers, and then weaves it across the whole album. Despite endless highlights, it’s an album that deserves to be heard as it was made to be heard, in its entirety. A playlist in its own right.

Despite The Pace of the Passing being very much the mind of one man, Toothless welcomes some friends to assist in finding this vision. Marika Hackman (Palm’s Backside), Tom Fleming of Wild Beasts (The Midas Touch), Bombay collaborator Liz Lawrence (Party For Two), and The Staves (The Sirens) all add vocal flourishes to the respective songs, whilst Bombay Bicycle Club’s vocalist Jack Steadman shares the production duties with Ed himself.

Toothless is very much the prime concern of Ed’s, rather than a momentary flutter away from the day job. Tours are in the process of being booked.

As an introduction to this creative young mind, The Pace of the Passing is a fantastic accomplishment and a moreish listen.

Toothless is very pleased to announce the details of his debut album.

The Pace of the Passing is released through Island Records on the 27th January 2017.

The announcement coincides with the release of a new single, Sisyphus.

Toothless: “Sisyphus is a Greek myth about a man whose punishment is to roll a boulder up a hill every day only for it to roll back down. I wanted to write a song with this story as the basis, but for it to be about a relationship between two people, not an individual’s daily struggle. This song is about always being there for someone no matter how many times they mess up, and no matter how inevitable it is that they will do it again.

“Sisyphus was the last song that I recorded for The Pace Of The Passing and it very nearly didn’t make the cut. For about a year it existed as a terrible J-pop style recording that I loved but everyone else absolutely hated. After months of persuasion, I recorded this version. Am very pleased they persisted!”

7. You Thought I Was Your Friend (I Want To Hurt You)

Dependence Sign with InVogue Records; New LP “Holding On When Moving On” To Be Released in May; First Single “Never In The Cards” Now Streaming‏