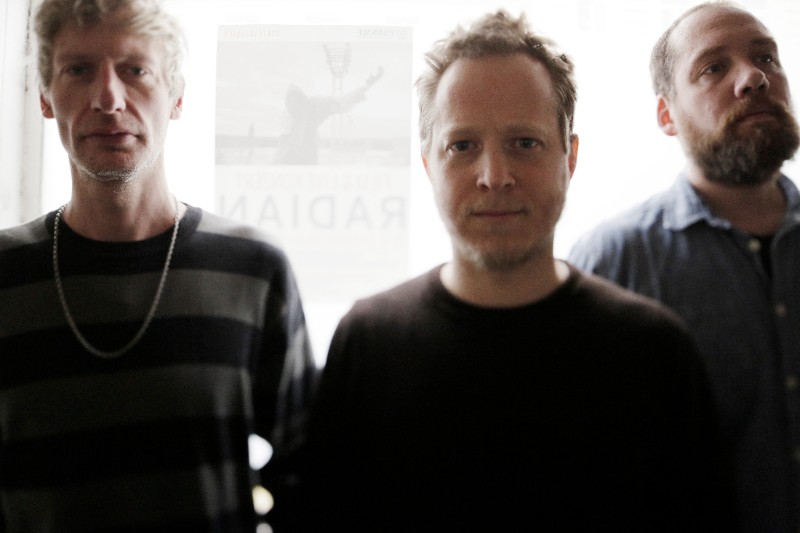 “They’ve outdone themselves on every level here.” – Pitchfork

“Not a pop, hiss, sudden pivot, or clanking crescendo during On Dark Silent Off is arbitrary; the album surgically deploys every element to subvert structural motifs rather than uphold them.” – Bandcamp

Following the release of their acclaimed album On Dark Silent Off in late 2016, Vienna’s leading experimental outfit Radian have shared the brilliantly subtle, densely textured video for “Scary Objects,” directed by Billy Roisz and Dieter Kovacic. The video perfectly matches Radian’s knack for dealing with elements that are often byproducts of a process: the sound of a cable entering the socket of a guitar, the sound of a switch, hums, sound of the fingers tapping on the string of a bass or the sound of the hand gliding between two chords of a guitar. These sounds are not deleted, or hidden, they are often transformed into central elements of the pieces.

On On Dark Silent Off the trio of Martin Brandlmayr, John Norman, and Martin Siewert, use the method of “microscopic“ recording to zoom into sounds that would more typically be overlooked: the rattling of a marble on Brandlmayr’s crotale placed on a snare like in “Codes and Sounds,” the beauty and richness of cymbals, acoustic guitars played quietly and recorded closely.

Directors Roisz and Kovacic are video artists and musicians who have been active in the experimental art world for nearly two decades.

For more information on the making of the “Scary Monsters” video, check out the Quietus’ video premiere here:
http://thequietus.com/articles/21592-new-radian-video