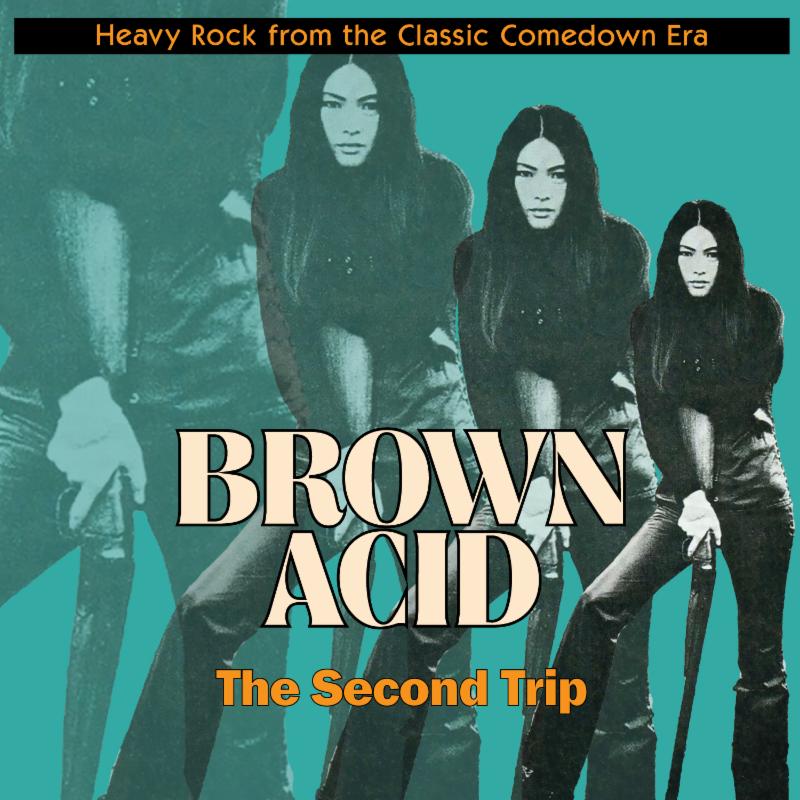 Dangerous Minds streaming entire Brown Acid: The Second Trip compilation ahead of release
Curated by L.A.’s Permanent Records & RidingEasy Records
The second edition in the celebrated compilation series of long-lost vintage 60s-70s proto-metal, stoner rock singles, Brown Acid is streaming in full today via Dangerous Minds. See what interesting details and ephemera they’ve uncovered, and hear/share the entire album HERE.
Curated in partnership by L.A. retailer Permanent Records and RidingEasy Records, Brown Acid: The Second Trip will be released (fittingly) on April 20th.
Wax Poetics recently premiered the aptly-titled “Show Stopper” by Iron Knowledge, featuring a breakbeat and incredibly infectious detuned bass warble motif that DJs would kill for. Hear & share “Show Stopper” HERE. Consequence of Sound earlier premiered the first track, Ash‘s “Midnight Witch” HERE. Please see complete track listing below. Watch a rare clip of Ash performing “Midnight Witch” on Australian TV HERE.
Some of the best thrills of the Internet music revolution is the ability to find extremely rare music with great ease. But even with such vast archives to draw from, quite a lot of great songs have gone undiscovered for nearly half a century — particularly in genres that lacked hifalutin arty pretense. Previously, only the most extremely dedicated and passionate record collectors had the stamina and prowess to hunt down long forgotten wonders in dusty record bins – often hoarding them in private collections, or selling at ridiculous collector’s prices. Legendary compilations likeNuggets, Pebbles, ad nauseum, have exhausted the mines of early garage rock and proto-punk, keeping alive a large cross-section of underground ephemera. However, few have delved into and expertly archived the wealth of proto-metal, pre-stoner rock tracks collected on Brown Acid: The Second Trip.
Lance Barresi, co-owner of L.A./Chicago retailer Permanent Records has shown incredible persistence in tracking down a stellar collection of rare singles from the 60s and 70s for the growing compilation series. Partnered with Daniel Hall of RidingEasy Records, the two have assembled a selection of songs that’s hard to believe have remained unheard for so long.
“I essentially go through hell and high water just to find these records,” Barresi says. “Once I find a record worthy of tracking, I begin the (sometimes) extremely arduous process of contacting the band members and encouraging them to take part. Daniel and I agree that licensing all the tracks we’re using for Brown Acid is best for everyone involved,” rather than simply bootlegging the tracks. When all of the bands and labels haven’t existed for 30-40 years or more, tracking down the creators gives all of these tunes a real second chance at success.
“There’s a long list of songs that we’d love to include,” Barresi says. “But we just can’t track the bands down. I like the idea that Brown Acid is getting so much attention, so people might reach out to us.”
One song on The Second Trip actually never even saw light of day, until now. “Bell Park Loon” bySpiny Norman – sounding like Jethro Tull on more acid and heavier cider – languished in a collector’s archives, unreleased for 38 years until Barresi and Hall arranged to license some of the collector’s goldmine.
Brown Acid: The Second Trip opens with the squealing guitar harmonies and Sabbath plod ofAsh‘s “Midnight Wish.”
Sweet Crystal‘s “Warlords” is a fuzzy and fierce Deep Purple/Arthur Brown inspired organ-led anthem. Raving Maniac‘s ‘Rock and Roll Man” is a tight and brash glam-meets-metal tune proving the true potential of a genre later squandered on Sunset Strip poodleheads. “Silence of the Morning” by Glass Sun serves grungy psych while the Volt Rush Band merges MC5 frantic energy with razor-sharp guitar leads. And, Iron Knowledge‘s aptly titled “Show Stopper” features a breakbeat and incredibly infectious detuned bass warble motif that DJs would kill for – had anyone been able to find the tune back in the day. Throughout, The Second Tripis yet another wall-to-wall set of blazing tracks that feels like you’ve uncovered a holy grail. And, in a way, you have.
Brown Acid: The Second Trip will be available everywhere on LP, CD and download on April 20th, 2016 via RidingEasy Records. Pre-orders are available for digital (with immediate download of the first two singles) at iTunes and Bandcamp, physical pre-orders at RidingEasy Records.

Elessar Unveil ‘My Skin’ Video Ahead Of ‘Reflections’ EP Release