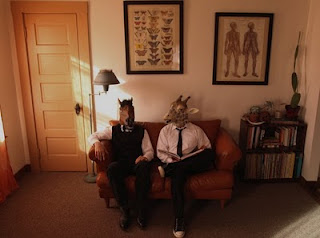 During october 2010, inspired by National Novel Writing Month, an idea was set up for any music lovers, not just musicians to create a full album, 36 minutes or more in length, in one month.

The rules of the project were as follows
People worldwide participated including many well known bands including circuit sweet favourite Giraffes? Giraffes!
This post was G?G!’s incredible effort.
EYE CANDY AND THE BREATH OF HEAVEN THEMSELVES
Released 9th November 2010
Written, performed, recorded and mixed by Joseph Andreoli.
Mastered by Ken Topham.
SYNESTHESIA
Also Released 9th November 2010
“Synesthesia” is a collection of sounds, recorded by Ken Topham and several collaborators, arranged into musical pieces, representing audio interpretations of types of scents. The collaborators were given a list of scents from which to choose and interpret into sound. These sounds were arranged, accompanied, edited, and produced by Ken Topham at Beef Studio during the month of October, 2010.
Photo by: www.lindseypalatino.com