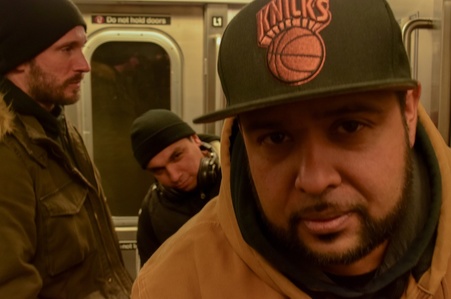 DÄLEK SHARE THE LATEST SINGLE ‘CONTROL’ FROM THEIR UPCOMING LP ASPHALT FOR EDEN,  RELEASED THIS MONTH VIA PROFOUND LORE
From Dälek‘s long awaited new LP Asphalt For Eden (their first full-length album since 2009), ‘Control’ can be heard playing at FACT, ahead of its release later this month (April 22nd) via Profound Lore. Vicious and articulate flow defines the track, which takes aim at claustrophobic, oppressive surroundings, over a trademark Dälek beat and melody sucked in to a wind-tunnel of smothering, rushing ambience. The penultimate track on a gripping record, you can listen to it now at the link below, and pre-order here.
LISTEN TO DÄLEK’S ‘CONTROL’
“Given more of self than there was self to give
Frequency for breath cause these sounds will outlive”
Conceived in New Jersey from its emerging DIY scene from the late ‘90s, Dälek were known as pioneers over the last fifteen years for their intriguing sound which fuses a blend of progressive hip-hop artistry supported by a rhythmic backdrop consisting of sonic experimentation through noise music and dark ambience. Their singularity would be highlighted in five groundbreaking full-length albums: Gutter Tactics (2009), Abandoned Language (2007), Absence (2005), …From Filthy Tongue of Gods and Griots (2002) – all released on Ipecac Recordings – as well as Negro Necro Nekros (1998) on Gern Blandsten. Dälek supported those albums on tour for over a decade and have shared stages with influential artists such as KRS One, Tomahawk, The Melvins, TOOL, Grandmaster Flash, Jesu, Dillinger Escape Plan, Pharcyde, RJD2, DeLa Soul, Prince Paul, Lovage, ZU, Black Heart Procession, Gaslamp Killer, Earth, Flying Lotus, The Bug, Mastodon, Fantomas and more. In 2011, Dälek quietly went on hiatus for an undetermined amount of time, as the members needed a break from the rigorous schedule on the road.
Fast forward to Spring 2015, mastermind and producer MC Dälek (a.k.a. Will Brooks, with the blessing of ex-member/co-producer Oktopus) revived Dälek with a new lineup which now includes DJ rEk on turntables and co-producer Mike Manteca on samplers and effects. The trio have returned with their signature mind numbing, genre bending blend of beats, noise and lyricism and are preparing to release the highly anticipated first official Dälek release since their last full-length, 2009’s Gutter Tactics. Titled Asphalt For Eden, this new album sees a new creative peak for Dälek and will bring a new awareness for this cult hip-hop entity now resurrected and ready to show a formidable display of true hip hop artistry and experimentation.
See Dälek on April 22nd for their record release show at The Bell House in NYC & look for more live appearances to be announced soon.

ASPHALT FOR EDEN TRACKLISTING
1. Shattered
2. Guaranteed Struggle
3. Masked Laughter (Nothing’s Left)
4. Critical
5. 6dB
6. Control
7. It Just Is
“Dälek’s take on hip-hop is foreboding and hypnotic in a way that feels unexpected; sure, in the Age of Future, creepy, dark vibes are almost de rigeur, but Dälek takes it a step further towards the abyss by incorporating a seething electronic edge—think Einstürzende Neubauten, not Soundcloud… Their sound is so complex and quixotic that the group has also found itself sharing stages with the disparate, experimental likes of KRS One, Tomahawk, The Melvins, TOOL, Grandmaster Flash, Jesu, Dillinger Escape Plan, Mastodon, and Earth. On Asphalt for Eden, harsh EBM and biting electronic beats mesh bizarrely well with long, winding sheets of shoegaze (see the glorious ethereal swell of “Masked Laughter (Nothing’s Left)”), trills of trip-hop, and MC Dälek’s purposeful, enunciated rhymes.” – NOISEY
www.facebook.com/dalekmusic
deadverse.com
www.profoundlorerecords.com
www.facebook.com/profoundlorerecords