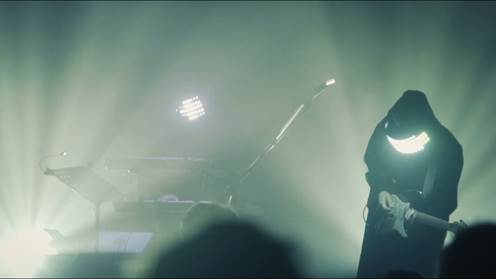 The special guest at the London and Manchester shows is the new Warp signing, New York based vocalist and producer, Lafawndah.

“The four-piece appear in masks and black robes suggesting an order of faceless funk monks. Their live instrumentation injects new life into the frenetic jazz fusion of Squarepusher Theme and adds an emotional intensity to the melancholic colour of Iambic 5 Poetry” Mixmag

SHOBALEADER ONE’s thrilling debut shows in Brighton and London last October were rapturously praised by both critics and fans alike, who marvelled in hearing seminal Squarepusher classics brought to life by Tom Jenkinson and a handpicked band of virtuoso musicians.

Now, for the first time ever, video footage has been released to give fans a taster of what’s to come this May in Manchester, Berlin and London. The group have been deep in rehearsal mode, honing an expanded set that’ll be even more incendiary and dynamic than their auspicious debut.

Shobaleader One first emerged as a vehicle for Jenkinson’s compositions with vocals, and evolved into the killer release ‘d’Demonstrator’. After three years touring the almighty Ufabulum and Damogen Furies live shows, Tom is working with the band again with renewed enthusiasm, developing new ideas as well as reinterpreting choice classics from his catalogue.

Speaking of catalogue, Warp records will be re-releasing deluxe editions of Squarepusher’s classic albums later this year. Watch this space for more information.