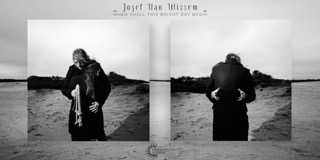 Dutch minimalist composer Jozef Van Wissem has announced a series of European live dates which will see him perform at St John on Bethnal Green Church in London on 26th April.

Earlier this month Jozef also posted a new track online taken from his upcoming album “When Shall This Bright Day Begin”. Listen to ‘Detachment’ here:

Jozef comments: ”The meaning of detachment is up to the imagination of the listener as i am still trying to figure out what it means myself. However, in a contemporary setting these words could address suicide, immigration or just simply leaving your lover. Like finally doing what you really want to. Or like a detachment of the soul to worldly matters. You know, voluntary departure.”

The album harbors eight new compositions that will feel both familiar and fresh with Van Wissem pushing his compositions subtly away from a rigid contemporary classical style into a more open sound with an almost experimental dark folk/rock orientated emphasis. Van Wissem even quite literally opens up his work as he invited renowned artist Zola Jesus for two collaborations. Listening to the album this comes as no surprise. The musical touch of Zola Jesus on this album blends seamlessly with the sound horizon of Jozef Van Wissem. The album is scheduled for a March 18th release.
In 2013 he won the Cannes Soundtrack Award for best score at the Cannes Film Festival for “Only Lovers Left Alive” a vampire film by Jim Jarmusch. The soundtrack was released by ATP records in 2014 and ended up high in the charts. Van Wissem is ‘both an avant-garde composer and a baroque lutenist and thus no stranger to dichotomy’, according to the New York Times. V
Van Wissem plays live and records with Jim Jarmusch, Tilda Swinton and Zola Jesus. He made three records with Jarmusch and played both in Europe and in the USA as a duo. He does live scores to silent films, scored several award winning soundtracks and is also acting in film. He makes music which is hypnotic in a way that’s just as challenging as more confrontational music. He’s performed over 800 solo lute shows at concert venues around the world including prestigious rock festivals like ATP and Primavera Sound playing his all black one-of-a-kind baroque lute custom build.

‘his compositions are mystic and set in hypnotic darkness’ – NPR