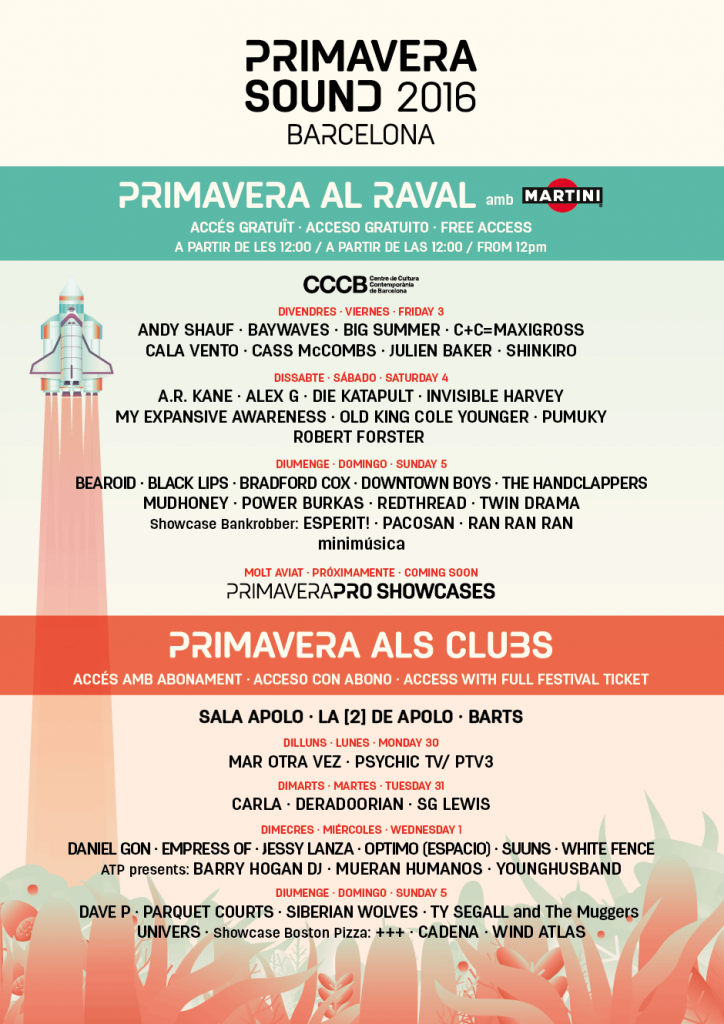 Al Raval, epicentre of Primavera Sound in the city

Primavera al Raval will for the first time and with the help of Martini bring a massive part of Primavera Sound’s ever-growing complementary programme to this neighbourhood in the heart of Barcelona. A large number of concerts in the emblematic Centre de Cultura Contemporània de Barcelona (CCCB), institution that collaborates in the production of this new initiative that continues the organisation’s firm commitment to make quality music available to all the people of Barcelona.

There will be three stages on which around 70 artists and bands will perform over the first weekend in June during the daytime. The concerts by the biggest crowd-pullers will take place outdoors in Plaça Joan Coromines on the Martini stage, while the other more intimate format concerts will take place indoors in the Sala Teatre of the CCCB. The music industry meeting PrimaveraPro will have its own stage (DayPro) for showcases transforming the Pati de les Dones into an enclave where one will be able to discover emerging artists not often heard outside their country of origin.

Whilst waiting to discover the line-up of the PrimaveraPro stage, the great variety of styles on offer during Primavera al Raval can be appreciated given the presence of heavyweights such as the American band Mudhoney, emblem of 90s grunge, the former frontman of The Go-Betweens, Robert Forster, the solo show by Bradford Cox (known for his projects Deerhunter and Atlas Sound) or the garage madness of the Black Lips. With them, artists with an established career such as Cass McCombs and the dreampop pioneers A.R. Kane will perform alongside with young upcoming artists who will include Andy Shauf, Julien Baker, Alex G and the Italians C+C=Maxigross and contemporary sounds from the underground scene such as Downtown Boys and Old King Cole Younger.

As always, the programme will be complemented by a significant local representation made up of Die Katapult, Invisible Harvey, Big Summer, Shinkiro, Redthread and Twin Drama, who will be accompanied by other names from the national scene such as the Madrid band Baywaves, Bearoid from Valencia, the Girona bands The Handclappers and Cala Vento, Pumuky from the Canary Islands, Zaragoza band My Expansive Awareness and Power Burkas from Vic. The Catalan label Bankrobber will also be present will concerts by Esperit!, Ran Ran Ran and Pacosan.

And Primavera Sound’s parallel programme outside the Parc del Fòrum site – that will include the free inauguration day on Wednesday 1st June with concerts by Suede, Goat, Grupo de Expertos Solynieve, El Último Vecino and Doble Pletina – will not be limited to the popular Raval neighbourhood, but will also include many other activities united under the umbrella of Primavera a la Ciutat.

The spirit of the festival will spread to the concert venues of Barcelona with Primavera als Clubs. Apolo, La [2] de Apolo and BARTS will host the live performances which on the Monday will open the sixteenth edition and they will continue on the Tuesday and Wednesday culminating on the Sunday with the now traditional closing party. Newcomer bands and consolidated bands will flood these venues: the mythical Psychic TV/PTV3, rock by Ty Segall and The Muggers, electronic pop of the moment from Empress Of, Jessy Lanza and SG Lewis, controlled experimentation by Suuns and Deradoorian, guitars Parquet Courts and White Fence and a showcase hosted by ATP with Younghusband and Mueran Humanos, as well as the DJs Optimo (Espacio), Dave P and Barry Hogan. The stage comeback of the legendary Mar Otra Vez, dream pop by CARLA, noise pop from Univers, rock by Siberian Wolves, DJ Daniel Gon and a showcase by the Barcelona label Boston Pizza with +++, Cadena and Wind Atlas will complete the programme.

The Primavera als Bars programme will also be included in the free activities, with small format performances in bars and venues around the city, Primavera als Barris that for the second year running will bring together live music lovers in different civic and youth centres around Barcelona and In-Edit, that will once again screen a selection of music documentaries. The complete programme of these cycles will be released soon.