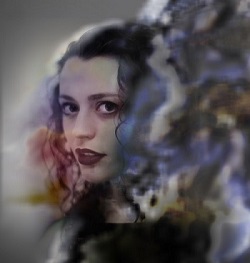 The five-track release follows the duo’s success with their first single ‘Holes’, described as ‘hauntingly soulful’ by Fame Magazine when it was released as part of the squareglass compilation ‘Transparencies’.

The duo comprises Goldsmiths alumni Amy Spencer, a singer/songwriter who also works with the likes of Noisey-approved Junk Son and Girls Music signee Zulu, alongside producer Avi Barath aka Bunki, whose previous collaborations include VV Brown and The Guardian former ‘New Band of the Week’ Semi Precious.

The pair’s textured sound showcases nuanced, lyric-conscious production that further articulates the personal themes tackled. Much of the EP’s reflective subject matter retrospectively confronts past experiences with the way these felt in real time. Utilising these different perspectives, the moving lyrics shed light on personal conflicts, struggles and emotions which are carried by Amy’s powerfully crystalline, at times distorted, vocals; all wrapped up in a carefully crafted sound world that is at once reserved and dramatic.

‘Words Over Yours’ is the first cut to be released from the EP, with ‘Hiding‘ and ‘Split’ to follow as further singles in January. The full EP will be launched with a special live performance at The Arch Gallery in London on 28th January accompanied by live visuals.

‘Split’ will be available on one of squareglass’ trademark 7″ square vinyl records, and opens with building layers of distorted synths, paving the way for contrasting vocals that create the feeling of a dialogue. As the track continues, booming bass and echoing percussion join the throng alongside whispered samples, whilst Spencer’s vocals float above the atmospheric peaks and troughs of Barath’s production.  Haivng already won the support of electronic impresario Matthew Herbert, who featured their first single ‘Holes’ on his ‘Crossing Lines II’ compilation, Leiik’s debut EP represents the refinement of their unique and haunting sound, forming yet another strong release from squareglass.

JEFF GOLDBLUM – New album ‘I Shouldn’t Be Telling You This’ out now!