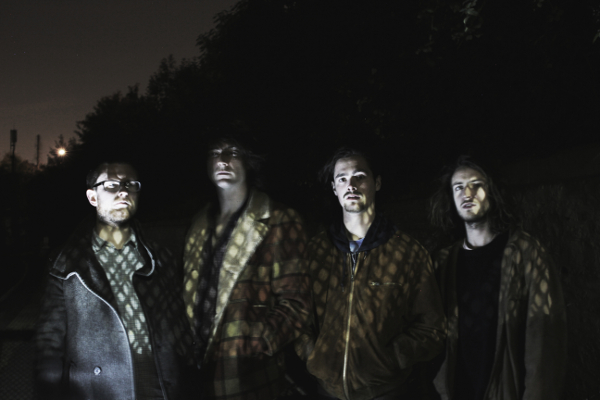 Bristol’s Velcro Hooks are offering the first taste of their debut album, due 2016, with ‘Severin The Mind’.Released January 15th via Howling Owl Records, ‘Severin The Mind’ is a squalling, off-kilter slab of fuzzed out garage-rock.

Velcro Hooks’ story began in the city of Quetzaltenango, Guatemala, where Canadian Jenner Blank met Englishman Thom Mason in the back alley of a hostel amidst an ocean of discarded bedbug-ridden mattresses. This introduction inevitably leads to a suitably ridiculous fortnight, but also an association of the musical type—they play guitars and bond. The burgeoning kinship was put on hold as the pair returned to their respective homelands of Victoria and Bristol. Following a year of unproductive stops and starts Jenner packed his bags to head to the UK. Knowing precisely one British person, Blank moved to South West of England and found Thom, who moved him into the box room of his flat – also shared by guitarist Dom Mitchison and drummer George Garratt. Fate plays its hand and random intensity joins them at the hip. Velcro Hooks is born.

Bristol’s Howling Owl Records soon takes the band under its wing to help launch the debut release, an EP entitled Gymnophoria. The first pressing of the 12” vinyl sells out within a week while BBC 6 Music and XFM catch on quickly and begin to play ‘Girlfren’ and lead track ‘A Love Song for T.S. Eliot’. Following the release of their double a-side single and a growing reputation as a chaotic live force, Velcro Hooks pressed pause. The band stopped gigging, retreated, built their own studio in Bristol and began writing, recording and mixing their debut album.

They disappeared for a year and a day into a sweat and dust fug of their own making, a deliberate smokescreen as they devised their magnum opus, adding a new veracity and urgency to the already explosive mix of off-kilter sprawling hook-filled rock. The self-titled debut is a knife-edge ride, a foam mouthed gallop, a lit touch paper in a woodshed of dry kindling. ‘Severin the Mind’ is the song you need to hear first.