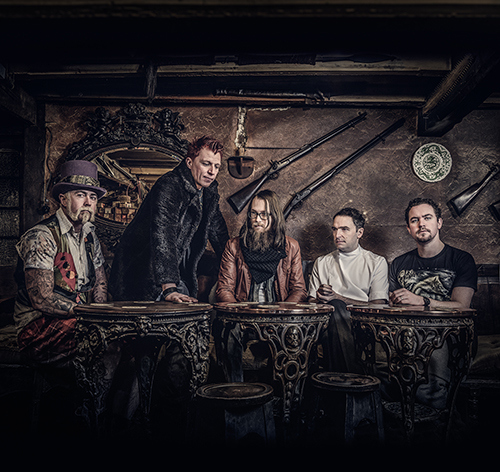 Experimental rock five­-piece Kitten Pyramid are set to release their striking debut album Uh-Oh! this Spring. The record juxtaposes so many surprising and jarring elements that The Guardian’s Paul Lester suggests“Picasso himself could have been at the controls.”

In his New Band of the Day column in the Guardian he writes;

“They’re a progressive rock band. After that, fact-wise, everything is a blur. Even that fact – in fact – is a bit vague, or open to interpretation, conjecture and heated debate, that they’re a progressive rock band, because although there are prog elements in their music, there are also folk ones, punk ones, heavy metal ones, and, oddly, glam ones. One of their tracks sounds like Kaiser Chiefs meets King Crimson, another offers a mashup of mariachi, Mahavishnu Orchestra and Mott the Hoople, and another is like Zappa ripping the piss out of Pink Floyd. Dark Side of the Burnt Weeny Sandwich, anyone?”

“The Kitten Pyramid session was a great experience for me. It was so refreshing to have such an exciting and creative approach to making a record…it is one of the most creative, fun, rewarding and at times heartfelt albums I’ve had the pleasure to work on. I can’t wait for everyone to enter their world.”

Sounding like a wonderful mixture between Super Furry Animals, Frank Zappa, Bowie and Field Music, Kitten Pyramid was fashioned by artist Scott Milligan who initially put the band together to play the sound track to a movie in the making (also called Uh-Oh!) with his late uncle as the catalyst for the story which explores schizophrenia.

Both the album and the movie is the culmination of several talented people collaborating to create something that is refined, spectacular, exciting and intricate but also communicates the beginning of a story, which will evolve throughout this year and no doubt fascinate many.

Speaking of the project Scott writes; “I’ve always liked the idea of the band being a collective that can expand and contract depending on the amount of people up for it and the size of the stage. I think there will always be a core 5 but we’ve been as large as 20 and I’m keen for the band to have a circus-like feel where folk can join when we’re in town or decide to follow us for a while.

We’re also really intrigued by the potential therapeutic benefits of music, which is where Arts for Health fell into place and the daytime hospital tour building up to the album release should be an amazing educational experience. I’m really keen to understand what sufferers of  Schizophrenia experience to help chip away at the stereotype that often gets confused with psychopathic behaviour (which I’m learning are traits more often found in Bankers, CEO’s and Lawyers). Sadly, it’s people like my uncle who lived alone in his flat with a mental condition that people are more likely to be afraid of, and THAT’s crazy. He was more likely to be threatened than be threatening. The Uh-Oh! Story and music is about the differences between schizophrenics and psychopaths and will be ultimately be a film.”

Kitten Pyramids’ Uh-Oh! will be released April 28th on both physical and digital formats and the band will do a week-long psychiatric hospital tour (and music venues in the evenings) beforehand, including St. Georges in Stafford where Scott’s uncle was a patient. They end up in London with a performance at London’s famous Bedlam hospital on Friday the 25th of April and with their final tour date launch party in London on the 26th at The Hope and Anchor in Islington.