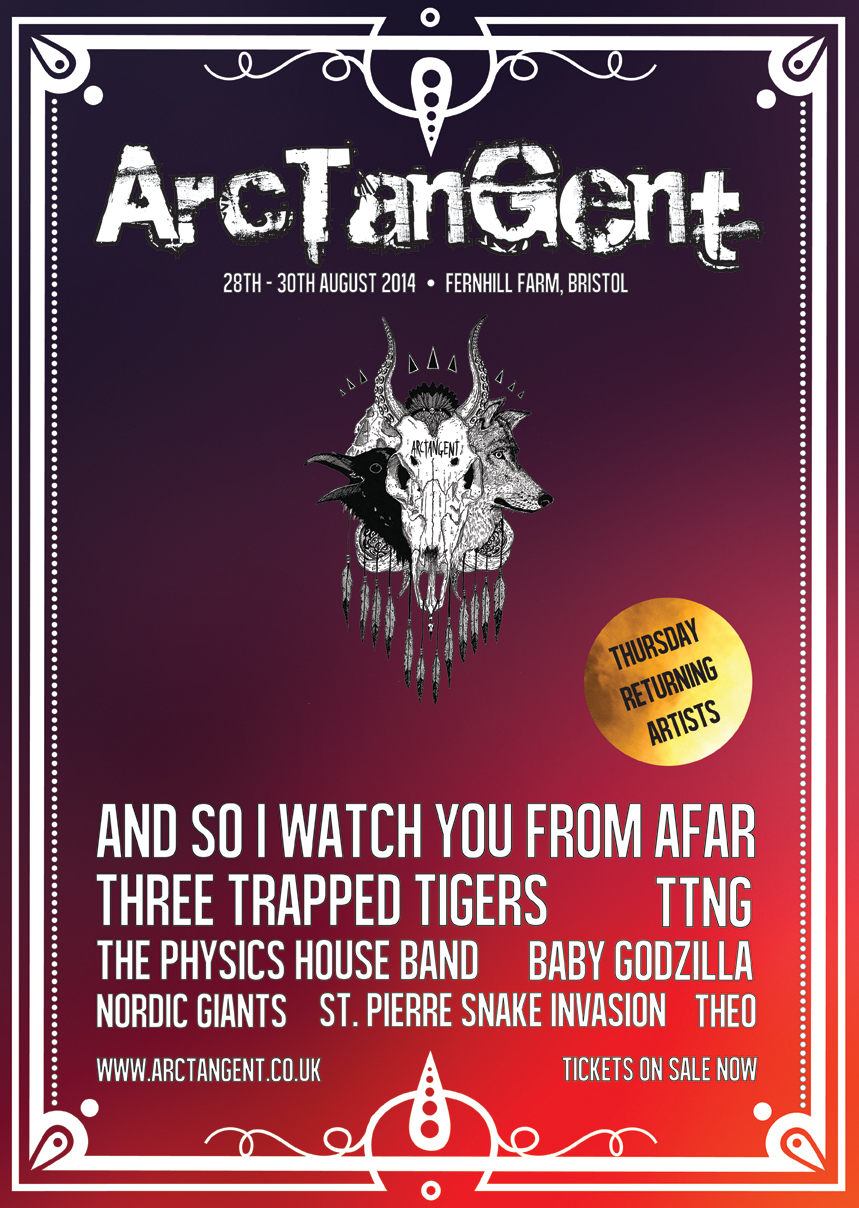 A handpicked line up from the 2013 bill is announced for the Thursday “VIP Early Entry” night of ArcTanGent.

The special returning guests night is to be headlined by And So I Watch You From Afar with support from Three Trapped Tigers, TTNG, The Physics House Band, Baby Godzilla, Nordic Giants, The St. Pierre Snake Invasion and Theo.

Adam Betts from Three Trapped Tigers says “ArcTanGent was a total treat for us. It really reminded us how we are part of a great scene of incredibly diverse and dedicated bands, and there was a great sense of camaraderie, having met lots of the guys over the years – Tall Ships, PHB, Fuck Buttons, Bo Ningen, AIWYFA – all friends that it was brilliant to catch up with. The audience were amazingly warm and made us feel proud to be involved in such a successful first year of a festival, and of such a creative vibrant scene of bands”

Organiser James Scarlett says “we wanted to bring back some of the bands that helped make last year’s ArcTanGent such a success. The VIP Early Entry is an optional night, so it’s really targeted at the super-fans. Bringing back some special guests will excite those who came to the festival last year, and will give those who missed it a chance to catch a little bit of the 2013 vibe.”

This is the first round of announcements for this year’s ArcTanGent, with many more exciting announcements still to come. The festival is still to announce bands from all over the world including Japan and the USA.

Tickets went on sale last Thursday (30th January) and all targets have been smashed. Organiser Simon Maltas says “we’ve already sold more than 3 times the amount of tickets compared to this time last year without announcing a single band. It seems that people are mad keen to be a part of ArcTanGent next year and they just know we’re planning on bringing them some awesome bands. We’re confident that we’ll totally sell out way before the event, especially when folks see the bands we’ve booked. Trust us, August 2014 is going to be seriously amazing for fans of math-rock and post-rock!”

To attend the Thursday night of ArcTanGent an early entry ticket is required. These tickets must be bought in conjunction with a weekend ticket and are available now from www.arctangent.co.uk/tickets/ for only £15.

Organiser Goc O’Callaghan says “We feel that festival goers really love the intimate and relaxed nature of a small, independent festivals like ArcTanGent, the feedback we received from last year was overwhelming. The site is laid out so everything is in easy walking distance and you can even camp right in front of the main stage! If you lose your mates, you’ll easily make new ones and from the research we’ve done ArcTanGent is undoubtedly the best priced festival out there.”