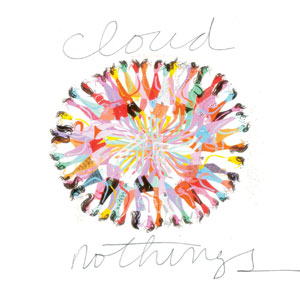 The brainchild/alter ego of young musician and Cleveland resident Dylan Baloi. What first began as a home basement project has since grown. When Dylan first began composing three years ago, due to having a very basic home set up; his ideas were being translated into a very lo-fi format. Not intentionally how the sound was supposed to bestow but as the feel for the writing and recording grew, the lo-fi flavour remained. Another sensation of a web find, Dylan’s music hosted online gained a large following, complimentary response and overall a lot of underground excitement for this emerging artist. 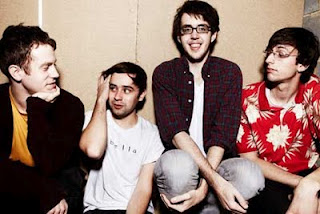 To get to the point of this years self titled album release, Cloud Nothings have released 1 Self titled EP, 1 split cassette, 1 split CD and 3 7” singles as well as touring hard with the likes of Les Savy Fav, Sky Larkin, Wavves, Best Coast and Titus Andronicus to name a few. To tour live and reach new people, Dylan formed a live band in TJ Duke on bass, Jayson Gerycz on drums, and Joe Boyer on guitar. The band have been credited for playing the likes of SXSW and offering an intense precise tight live show. Signing with Wichita Recordings, Cloud Nothings have been able to record somewhere besides the basement. For a producer, Dylan chose Baltimore’s Chester Gwazda, known for his work with Dan Deacon and Future Islands. The album was recorded this past August in a warehouse studio in Baltimore’s famed Copycat Building (home to the original Wham City and many of the city’s best musicians and artists). Cloud Nothings self titled album boasts potential with the captured crispness and boldness that Dylan had envisioned. On the album Dylan plays all the instruments and packs it with what their live sets entail; energy, precision and hooks. Impressive for one man to make the sound of many, to know what he wants and to capture it well. Although claimed to have left the lo-fi scuzzy away for this album, ultimately that scuzzy raucous sound can still be clearly found in his work.

Altogether the album offers 11 tracks condensed into just 30minutes, jammed with start to finish pop scratchy sounding punk, ticklish lulls and whiney cries. The album itself, nothing short of fun. Its inspiration drawn from a period of time a man of that age shouldn’t be so familiar with, but these influences and Dylan’s style simply makes something of their own. Recognized for 90s pop-punk roots, Dylan’s simplicity carries less aggression for a pure pop-punk credibility, however that notorious “teenage angst” is clearly there.

To some this album is easy listening, to others warning should be made as its full on intensely guitar driven and indubitably prides itself on the fuzz, present throughout. With some tracks a lot shorter than the rest, this album provides bursts. Bursts of emotion, bursts of riffs, bursts of build-ups‘. Elements within the tracks have been purposely spaced out to avoid a blur, as this is a very extreme journey on quite a short amount of time.

Dylan offers the most honest and direct lyrics from the beginning. Opener track “Understand at all” begins with sprightly energetic riffs, harmonized with melodic vocals backing ahhhs and oohs and captures lines like “I don’t understand love, I don’t understand at all”. There’s a simplicity within the lyrics that make the tracks honest but forceful.
This force is carried on in track “Heartbeat” the shortest track on the album. Just 1minute and 10 seconds of impressive beat stopping, repetitive vocals creating a charismatic track phat’nd with echoey backing vocals. Again, direct and forceful in such a short surge. This track is one that sticks in your mind,  it captures such energy you end up longing for it to extend its play.
“You’re not that good at anything” provides an expressive effective large sound scape combined with a crashing finale, the arrangement shows a progression in his work, both physically and mentally more mature following previous releases, this track highlights his abilites and strengths in oddly a more progressive and epic track.
“On the Radio” is a track which  provides more vocal capability, its combined with a fiery quick tempo and vivacious abrupt drum beats. Its not all an upscale ruckus as track “Forget you all the time” softens the set of tracks with a more timid and slower approach. The album finishes it journey with track “All the Time” which supplies more breakdowns, start and stops, more rhythm and an outstanding riff that’s built to last.

The self titled album in its entirety offers riff ricochet and bouncing beats, gaspy and at times throaty vocals and strands of scratchy yet shimmering strings. Thoroughly listen to this effort and you will find it’s a surprisingly deep record. Creatively and musically there’s a lot more to it and Dylan should be proud for maintaining those pop punk ties but twisting them into his own.
Granted, its an intense release from start to finish, but it’s a record you can listen to time and time again. A solid effort on a maturing musician.

Just one of the sites this will be featured, more links shortly.
Also featured at Altsounds- http://hangout.altsounds.com/reviews/129104-cloud-nothings-cloud-nothings-album.html