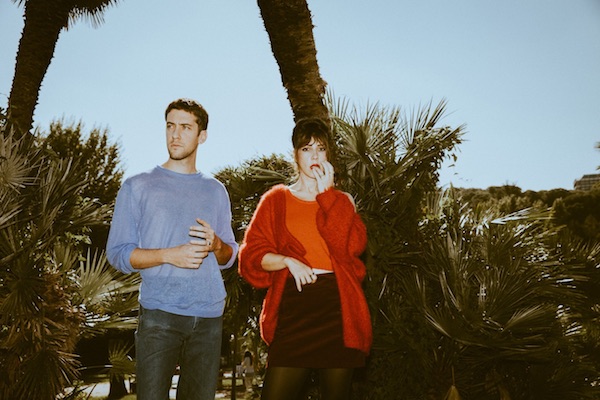 Lo-fi pop duo Malihini will release their debut album ‘Hopefully, Again’ through Memphis Industries on 8th March 2019. Produced by Richard Formby (Wild Beasts, Ghostpoet, Darkstar), ‘Hopefully, Again’ was written in Sicily and recorded at the remote Giant Wafer Studios in Wales. Malihini, aka Rome-based couple Giampaolo Speziale and Federica Caiozzo, have unveiled the first single to be taken from the album, the soulful, superficially pretty ‘Hopefully Again’: its languid drums and woozy electric guitar hook-line usher in a sort of conversation between circling lovers – Caiozzo taking the first verse, Speziale the second, the two combining for the redemptive and addictive “Love is coming back” chorus line. “It’s about when you’re first really into one another”, explains Speziale. “When you try to be someone, as seen through the eyes of the other. It’s about flirting, and the moment when you come back from the slowness of depression, you dress up and you’re ready to confront with the fastness of love/life again”.

‘Hopefully, Again’ is accompanied by a video filmed and spliced together by the band themselves from footage of their travels to Rome, Portugal, Sicily, Iceland and London.

Their name may mean ‘newcomers’ in Hawaiian, but Malihini deal exclusively in the music of lived experience and time-honed emotional intelligence, their disarming musical universe never less than distinctive, yet resonating with a confessional, modern European pop sophistication of a kind elsewhere purveyed by the likes of Charlotte Gainsbourg, Jose Gonzalez and Our Broken Garden. Listening to the ten co-written songs that grace Malihini’s exquisite debut long-player, ‘Hopefully, Again’, can sometimes feel like eavesdropping on a couple’s intimate emotional dialogues, such is the ingenuous honesty of the duo’s writing. Yet combined with their minimal, yet opulently textured arrangements (“classic songwriting matched with pared-down electronics”, according to Clash), crammed with subtle melodic hooks and an embarrassment of earworm choruses, they transform the personal into the universal with a delightfully unforced eloquence.

Swapping Camberwell for Mid Wales, specifically the remote Giant Wafer studio in Powys (“it was just us and a few sheep and chickens”, recalls Speziale), the album was recorded quickly, with the duo playing most of the instruments live, abetted once again by producer Richard Formby and long-term drumming amico Alberto Paone. Writing had begun earlier in the year during an extended retreat on the Aeolian island of Vulcano, off the coast of Sicily. Images and atmospheres of the sea and ‘blueness’ duly permeate the album’s leanly arranged songs. “We always wanted to have just a few instruments,” says Speziale, explaining Hopefully, Again’s pared-back palette. “We write using only a guitar, a Casiotone keyboard, a toy synth and a drum machine. We’d start with loops and then just improvise melodies over the top, not listening back for three or four hours”. The lyrics would come later. “Some of the songs definitely take inspiration from personal events in our life, but sometimes I imagine things from someone else’s perspective”, says Speziale, reflecting on Malihini’s apparently candid, close-up-and-personal narratives.

Whether the songs work as de facto relationship counselling or not, they remain consistently intriguing and irrefutably alluring, always navigating deftly between emotional light and shade.