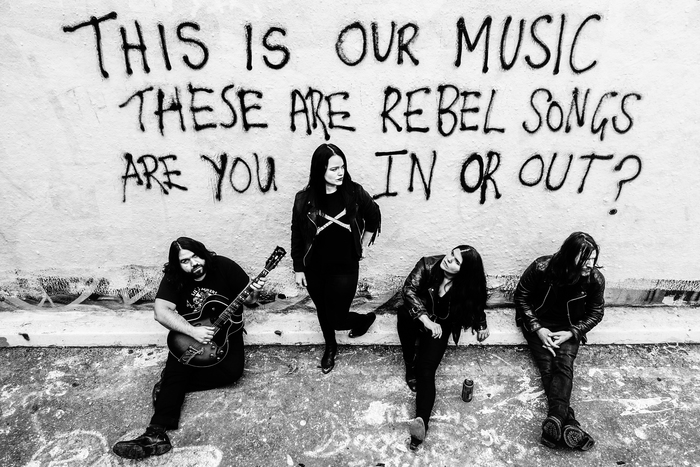 Following the release of the album Outsiders earlier in the year, London quartet The Magic Numbers will hit the road in December with some select tour dates across the UK, including Gorilla in Manchester, Nottingham’s Rescue Rooms, Islington Assembley Hall in London, plus two Scottish dates in Perth and Glasgow.

Outsiders sees a grittier direction for the band, whilst losing none of their renowned melodic flair. In their four star review Mojo described it as “full of gnarly guitars, scrunchy organs and tuneful innocence lost”, whilst The Evening Standard called it, “rancorous, bluesy and reminiscent of early fifties rock and roll” and The Mirror said that it is, “A maturely-crafted, intelligent and emotionally direct comeback”

They shared the video for the track “Ride Against The Wind”, which signifies a subtle but significant shift in the band’s lyrical themes. As Romeo Stodart explains; “It wasn’t a conscious decision to refrain from looking inward but I did feel a shift creatively with the things I wanted to say and share this time around. It’s allowed me the opportunity to play with characters like Michele & I have done on ‘Ride Against The Wind’ which we based upon a fictitious motorcycle girl gang who’ve grown tired of conforming and towing the line in their everyday lives.”

Flying their outsider flag high, The Magic Numbers formed in 2004, comprising Romeo Stodart and his sister Michele as well as fellow siblings Sean and Angela Gannon. The band enjoyed a string of successes including their Mercury Prize nominated self-titled debut in 2005, which reached double-platinum status and their second album Those The Brokes went to no. 11 in 2006 and earned Gold status. They went on to release The Runaway in 2010 and Alias in 2014 and Michele enjoyed a successful solo career. Over the years they’ve shared the stage with luminaries of the music scene including worldwide tours with Brian Wilson, Neil Young & Crazy Horse, The Flaming Lips and Sonic Youth.

Romeo explains further about the album title and direction of the new album; “Outsiders is how we’ve always felt. As a band, and as people. We’ve never really fit in. Even when things escalated quickly for the band, and we were at some awards ceremony, we always felt like we stuck out. It was the time of indie bands like The Strokes and The Libertines – and then there we stood.”

Co-produced by Dave Izumi in his own Echo Zoo studio in Eastbourne, work began on Outsiders in early 2017. The album, though instantly recognisable as a Magic Numbers record in its melodies, begins with a more raucous punch sonically. The confidence is more evident than ever before, noticeable immediately in the more bluesy, gnarly guitar sound.

“To us, music is everything,” says Romeo. “Rebel songs’ are about conviction, not wanting to just fall in line, putting your heart and soul into something that you believe in. I think it’s what the people colouring life outside of the lines tend to do which is how we came up with the title Outsiders. Because now is the time for people to be themselves more, and not think so much about fitting into boxes. That’s why the lyrics have a ‘together’ feel: we’re all beautiful fucked-up losers trying to make sense of it all. We’ve always been Outsiders.”

TIM HECKER SHARES NEW TRACK; YOU NEVER WERE TAKEN FROM ANOYO AHEAD OF THE ALBUM RELEASE ON THE 10TH MAY VIA KRANKY