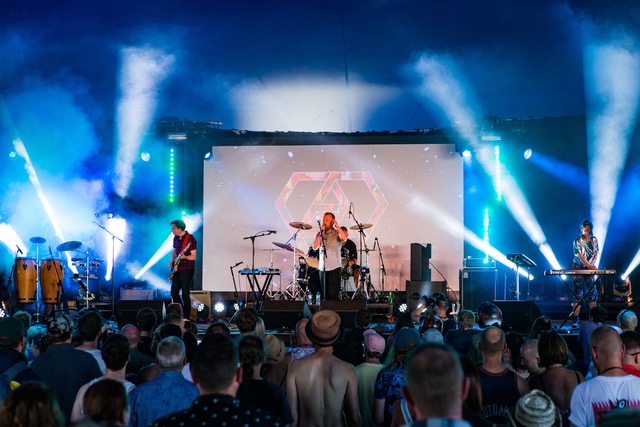 Manchester collective Hello Cosmos have shared a video for new track ‘Dream Harder’. The follow up to the massively well received first single ‘Raise The Dawn’, ‘Dream Harder’ is the next salvo from this sprawling and exciting creative project. Released on the collective’s own Cosmic Glue label the track has been given the video treatment by forward thinking creative agency Creative Arthur.

Put together and led by songwriter and bass player Ben Robinson, founder of Kendal Calling & Bluedot Festival, Hello Cosmos sees the musician surround himself with a small army of collaborators for a huge, long running recording project at Leeds’ Greenmount Studios (The Cribs, New Model Army, Pulled Apart By Horses) and a large number of other creative endeavors.

Beamed direct from an alternative universe in which The Fall were produced by DFA Records’ Andy Goldsworthy, Hello Cosmos hurtle towards Earth with a Radio Clash collision of post-punk, indie-disco and alternative rock. The band’s first single ‘Raise The Dawn’ and accompanying remix by Joe Thompson were hugely well received across BBC 6 Music, Radio X, Louder Than War, Gigwise and many others.

New single ‘Dream Harder’ is an impassioned call to arms for free thought from Robinson who explains “The messages we receive into our idle mind space every moment of every day have an on going impact. A lot of the time they go unnoticed but subliminally add up to create a sense of worry, a sense of lacking in terms of wealth, health & body image. They chip away at us to foster desires for goods, services, clothing and experiences that overwhelm us and leave us grasping for a sense of worth and contentment in our day to day lives.”

With this in mind Adam Smith, the videos creator took to augmented reality to create the video: “After speaking to the guys at Hello Cosmos about some of the themes around the song we started to form ideas around subvertising and alternative perspectives in conventional messaging streams. We’d been thinking about what if the power of marketing could turn its attention onto positive and alternative concepts and messages, as opposed to the usual commercial acts of distraction. This got us thinking about John Lennon’s billboard campaigns, ‘WAR IS OVER’, ‘GIVE PEACE A CHANCE’ etc. Imagine the impact if we were constantly only subjected to these such things? (Massive paradox in here too for us as a design studio that works alongside and with commercial brands on a daily basis).

Developing this made us revisit one of our favourite films, John Carpenter’s ‘They Live’, specifically the scene where Nada (Roddy Piper) discovers a pair of sunglasses which literally help him see through the selling screen to show the world for what it really is. We imagined the future of this synergy with advanced tech within our lives and personal systems and how marketing, social media and subliminal messaging within it become harder and harder to escape. As they combine and we go deeper, if feels more and more like an interface, like reality is being augmented and our lives take on increased gamification. Points, prizes, bad guys and level ups. With our human reality progressively being augmented the lines are constantly blurring.”

As well as releasing their first music this year, Hello Cosmos also made their live debut with three appearances across the Summer starting with CW9 Festival in Northwich where the band performed at the behest of The Charlatans’ Tim Burgess .

Hello Cosmos will be releasing music & playing select shows through 2018/19.