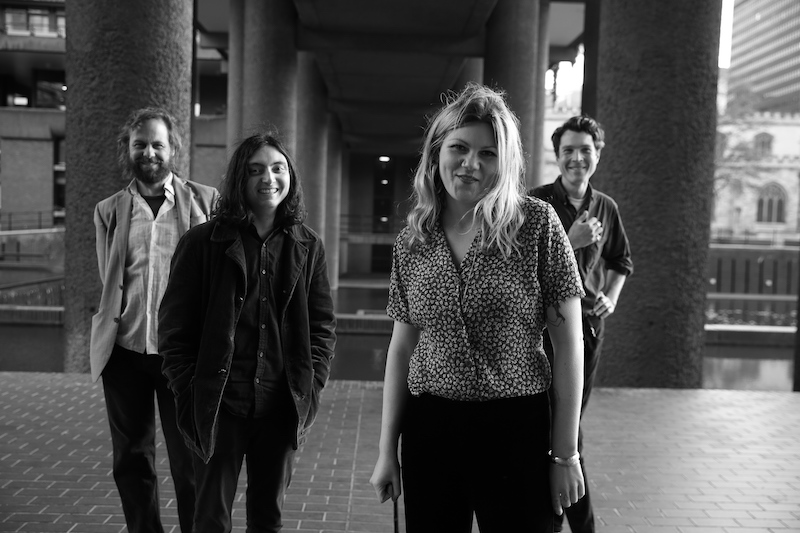 Following the release of their debut album last year, London-based four-piece H.Grimace are back with a brand new single “In The Body“, which is laden with their dark, smoky post-punk sounds.

Directed by British artist Georgina Starr, the video for H.Grimace’s haunting new track conjures a future-possible realm where women communicate through the power of coded gesture, instructional bodily ritual and the language of sculpted breath.

Speaking about the visuals, Starr said “The bubble is from the body, it is both sacred and profane. It is birth—the beginning of everything. It’s the first breath, the first word and the first sculpture. It is also a voice: the inside spoken OUT LOUD! The material is feminine. When it is chewed it becomes a potion or spell to transport and transform.”

The British artist Georgina Starr is renowned for her large-scale sculptural installations incorporating video, sound and performance. She has exhibited worldwide in galleries and museums from the Museum of Modern Art in New York and Tate Britain to Kunsthalle Zurich and the Museum of Contemporary Art Sydney. Her magically complex works challenge the viewer to re-examine the self, the unconscious and its ever-morphing biographies through a glittering and melancholic theatre of memory, mythology, and fiction. The band were honoured to have her work with them.

Over the past year, H.Grimace have been travelling across the UK playing live, including shows with BODEGA, The Men, Japanese Television, Pork Pies & many more; they will continue to play shows across the UK for the rest of this year. More info below.