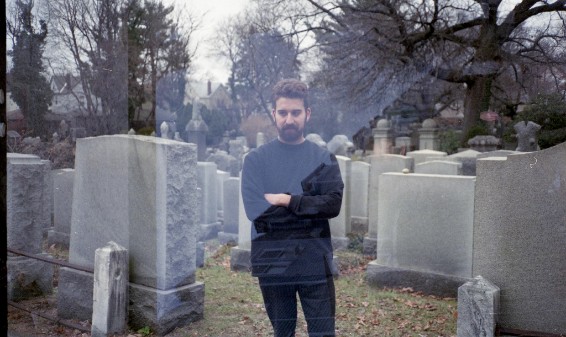 DUE OUT JUNE 15TH VIA EXPLODING IN SOUND RECORDS’ TAPE CLUB: YEAR TWO

Exploding In Sound Records is thrilled to announce a split release from Brooklyn’s June Gloom (aka Tall Friend’s Jesse Paller) and Rock Solid (aka Jaime Knoth). With each musician offering their own take on stripped-down indie rock, primarily voice and guitar, the two gifted songwriters come together on Subletter / Something Solid, a conceptual pairing of sorts as both Knoth and Paller were once esteemed EIS interns. The similarities go beyond the surface though, with each solo effort representing the time spent directly at the end of college, figuring out adult-hood and moving on with life.June Gloom’s latest single, “California” makes its premiere today on The Grey Estates, who called it, “a track of subtlety and softness, Paller using only his warm, but weary vocals to reveal an innermost struggle. Guitars are the only instrumental backing, repetitious patterns weaving their own paths that somehow meet in the middle. The track is as equally moving as its subject matter, its quiet nature making for a musical moment that feels so intimate.”

Jesse Paller has been making music throughout the country from his LA upbringing, DC college experience, and now as a resident of Brooklyn. He’s steadily played in Tall Friend and produced for bands including Human People and Boon, but his music as June Gloom comes from a close and personal space. Recalling both Elliott Smith and Built to Spill’s Doug Martsch, June Gloom’s songs follow in the wake of a break-up and the learning process that comes afterward. It’s a gorgeous song that really sticks with you in the best kind of sad ways.

Paller shared, “‘California’ was formed during a brief visit to my hometown of LA. At the time I was caught in a whirlwind of fresh heartbreak, intense nostalgia and the general lore of the place, an adult looking out my childhood windows. The song became my attempt to add to the lush canon of classic California songwriters, and the way they captured the strange dissonance I felt, burned-out despair within a picturesque, mystical landscape.” Two former Exploding In Sound Records interns come together to join forces on an incredible split cassette, each offering an intimate EP of stripped down singer/songwriter music.

Rock Solid has been a quiet contributor to the Tri-State music circuit. With only a few single releases on Bandcamp, Something Solid is Rock Solid’s first EP release. Musician and Illustrator Jaime Knoth began writing music under the Rock Solid moniker shortly after starting college in Brooklyn as a new creative outlet that grew out of her exposure to the small music scene in her hometown, Montclair, NJ.

The songs on Something Solid incapsulate Knoth’s transits from teen to adult, marking some of the struggles between family and friends; they are a celebration of a coming of age. When the release was approaching, she looked to close friend Adan Carlo (who sings on ‘Doing Fine’) to help her record the songs where they were written, in the attic of her childhood home. With Carlo’s help and contributions to these tracks, Rock Solid’s Something Solid is a gentle reminder to accept help from the ones that love you.

June Gloom is the solo project of Tall Friend’s Jesse Paller. He has played in several bands and recorded even more; June Gloom is where the musical ideas that swirl in his head can speak unfiltered, a space apart from collaborators’ visions.

After college, a harsh breakup, and a period of mental dissolution, alien feelings of guilt, rage and despair crept in. The Subletter EP (named for strangers that live with you) is an attempt to explore and exorcise the dark emotions that can derail a healthy process of grief and growth. Recorded on New Year’s Eve of 2017, in solitude in Paller’s apartment with a laptop and a phone, it replaces his earlier releases’ full textures with stark intimacy, a different way to face the usual demons: gently, but head on, with honesty.