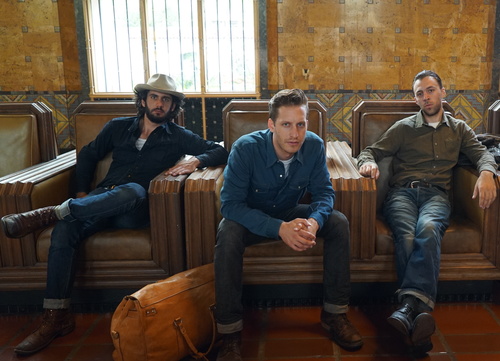 The Americans
UK Tour Starts 6 November
Debut album I’ll Be Yours out now via Loose
November Tour Dates:
Mon 6 Nov – UK – Bristol – Louisiana
Tues 7 Nov – UK – Manchester – Gullivers
Wed 8 Nov – UK – London – Borderline
UK Tickets: www.alttickets.com/the-americans-tickets
Full dates: http://bit.ly/AmericansEuroTour
LA outfit The Americans return to Europe next month for the first time since releasing their debut album I’ll Be Yours via Loose this summer. In addition to critical acclaim from the press, the record was also championed by key record stores – Rough Trade made it one of their Albums Of The Month – “From crooning laments, rich and glorious with sweeping sweet orchestrated lushness to disheveled, bluesy, rocking, frantic party time hoedowns, this album lifts you up and gently drops you down”.
They’ll head to The Louisiana in Bristol, Gullivers in Manchester and London’s Borderline (full details here.) Mixing old-time blues and country with a blue-collar rock’n’roll/rockabilly vibe, The Americans absorb and reconfigure the history of American music from Chuck Berry and Tom Waits to Bruce Springsteen.
The Americans were plucked from obscurity by Jack White, T Bone Burnett and Robert Redford to appear in the recent PBS/BBC4 series American Epic. Featuring artists such as Beck, Elton John, Nas, Willie Nelson, Alabama Shakes and many more, the film reconstructs the story of the first American music in the 1920s and re-assembled the recording apparatus that was used at the time. As experts in early music, The Americans were invited in to figure out the equipment and make the first recordings. Once the sessions were underway, they functioned as the house band, backing up various artists and suggesting songs to the filmmakers. Burnett was quoted as saying; “The Americans are part of this group, these genius 21st century musicians, that are reinventing American heritage music for this century. And it sounds even better this century.”
You can watch a compilation of their performances on American Epic here.

“The whiskey-soaked rockers and gritty ballads of their debut LP roll with hell-bent immediacy, as frontman Patrick Ferris straddles primal ferocity and haunted vulnerability.” Uncut 8/10
“Forward-thinking roots rock in the vein of Bruce Springsteen.” Evening Standard (Virtually Famous)
“Their primal rock’n’roll roots ground this album and vocalist Patrick Ferris’s voice bleeds, pleads and yearns.” The Mirror ★★★★
“Patrick Ferris’s voice has a rueful catch, reminiscent of Maverick’s leader Raul Malo, while The Right Stuff and Long Way From Home make a fair fist of Springsteen-style blue-collar rue.” Q
“The Americans eschew formal plans and genre conventions in favour of forging their own path, with this new single lurching into sunny realms to live as symphonic beaut full of twinkles, sparks, cinematic brass, and Beirut-level emotion.” The Line of Best Fit
“They draw from the great American tradition, with echoes of Springsteen, Guthrie and Chuck Berry …solid songwriting and top-notch musicianship should get The Americans some much-deserved attention.” Folk Radio
“It matches an awareness of songwriting’s roots with a few ideas on where it could head to… Engrossing, stirring musicality.” Clash

“From the first rolling guitar notes, carrying sadness and defiance like dust, this sweeps me up: I want to know everything about where that feeling came from, and where it’s going.” GREIL MARCUS | PITCHFORK

“Guitarist Patrick Ferris, looking like James Dean but even better, and an on-stage persona, as he belts a song and plays guitar, that is like a knife slicing butter on a sunny day.” RON WRAY | NO DEPRESSION

New Loose signing, Los Angeles quartet The Americans released I’ll Be Yours on 7th July. Having started out as a roots band enthralled by pre-war American country and blues, they have evolved into a blistering amalgamation of those influences, injected with a fiery blue collar rock’n’roll attitude, absorbing and reconfiguring the history of American music from Chuck Berry and Tom Waits to Bruce Springsteen. They named themselves after the controversial photo series by Robert Frank, which was first published in 1958 with a foreword by Jack Kerouac. Like Frank’s photos, The Americans’ songs are miniature biographies, intimate and empathic portraits of individuals that leave much unsaid.

The Americans’ debut album seems to have achieved just that. “They’ve shape-shifted back into the modern-day rock and roll band,”writes Cara Gibney (No Depression), “writing contemporary music of their time, incorporating the kernel of their traditional roots, enhancing their rock and roll credentials with the emotional quality of music made generations earlier.”

The band’s first tour was different from most. They roped in a friend to play drums using only a plywood suitcase, which he beat with a soup spoon. They set off on a meandering, quixotic odyssey that found them playing honkytonks, rural bars, a Navajo radio station, and a wine cellar in an abandoned Coca-Cola bottling plant. Some of the venues hadn’t hosted a live band since the 1980s. “We had a passport to the hidden heartland of our country,” recounts Jake. Nowadays their tours are more structured, but the guys still seek out the road less traveled.

Despite being unsigned at the time, The Americans have already appeared on US TV talk shows such as The Late Show with David Letterman, and served as a backing band for Lucinda Williams, Nick Cave and Courtney Love At the David Lynch Foundation’s concert for the 60th Anniversary of Allen Ginsberg’s Howl. They also recorded an original song for Hal Willner’s Son of Rogue’s Gallery(ANTI- Records), an album of sea shanties and pirate songs featuring Tom Waits, Keith Richards, and Nick Cave, executive produced by Johnny Depp and their music is featured in the Michael Mann produced film Texas Killing Fields, starring Sam Worthington andChloë Grace Moretz.